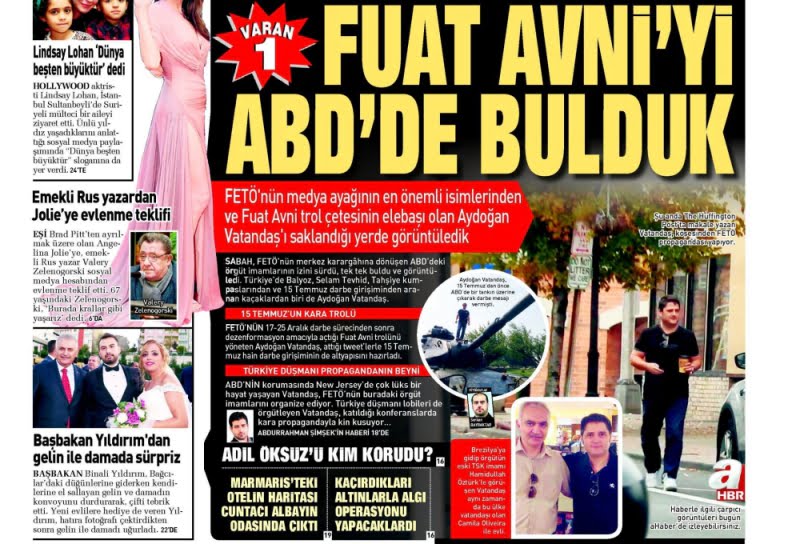 Following President Recep Tayyip Erdoğan’s statement that no country is safe for Gülen movement sympathizers, the pro-Justice and Development Party (AKP) media targeted exiled journalists in the US and Europe on Monday.

The Sabah daily, which was run by Serhat Albayrak, brother of Berat Albayrak, the son-in-law of President Recep Tayyip Erdoğan, published a story on Monday about investigative journalist Aydoğan Vatandaş, who lives in the US, claiming that he was whistleblower “Fuat Avni.” Publishing secretly taken photos and videos of Vatandaş, who used to write articles for The Huffington Post and Today’s Zaman, the daily labeled him a terrorist.

In another story published by the pro-Erdoğan daily Yeni Şafak, exiled journalists, including former Today’s Zaman Editor-in-Chief Bülent Keneş, were claimed to be living in Europe and engaged in efforts to create a multilingual news website with funds supplied by Germany and Austria. The daily also claimed that Gülen sympathizer journalists have been working on a TV channel in Germany.

The AKP government has speeded up a media crackdown since a July 15 foiled coup attempt. The government has closed down more than 130 media organizations and jailed in excess of 120 journalists. Dozens of critical journalists have left Turkey due to the crackdown.

The news stories came after President Erdoğan on Sept. 19 threatened followers of the faith-based Gülen movement living all over the world, saying that no country is safe for them.

“No country, no region anywhere in the world, is a safe haven for FETÖ [an acronym the government has been using to refer to the Gülen movement] and militants,” said Erdoğan during a press conference at İstanbul Atatürk Airport, before flying to New York for the UN General Assembly.

Dede said that “In this country, I witnessed how ASALA was finished [off]. One morning we will wake up and see some scum being caught at Sabiha Gokcen Airport. The media will cover the story like this: “Tuncay Opcin, Emre Uslu and Ekrem Dumanli …”

Turkey’s National Intelligence Organization (MİT) has been tasked with locating, arresting and even killing military officers who fled Turkey after allegedly taking part in a failed coup attempt in July, according a story in the Vatan daily on Aug. 30.