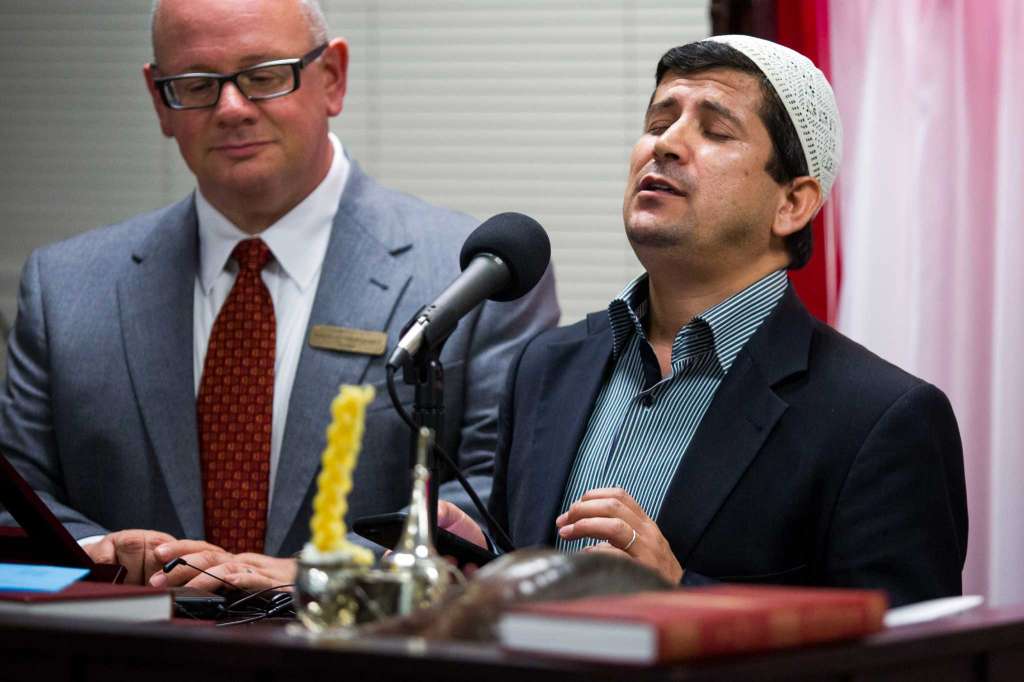 San Antonio, Texas -- October 12, 2016 -- Beytullah Colak, Imam of the San Antonio chapter of The Islamic Institute, sings a prayer with Rabbi David Komerofsky at his side during a dinner to break the Yom Kippur fast at Temple Chai. Ray Whitehouse / for the San Antonio Express-News

Even before Mustafa Safak arrived at Temple Chai on Wednesday for closing Yom Kippur services, the San Antonio Muslim read up on the traditions associated with the Jewish holiday.

The holiest of High Holy Days for Jews, when they atone to those they’ve hurt, ends with the breaking of a daylong fast, Safak learned, a mournfulness culminating in festivity.

He made note of a traditional dish served at such feasts and scanned the buffet for his goal — noodle kugel, a small portion of which he served onto his plate as members of the two faith groups gathered to break bread.

Simple exchanges were on the menu for Temple Chai’s Yom Kippur “break fast,” to which Muslims from the Dialogue Institute of San Antonio and the Raindrop Turkish House were invited.

It may be uncommon for Jews and Muslims in other places of the world to gather on a special day in Judaism, but the local faith communities have been practicing what they preach for about two years, leaders said.

Iman Beytullah Colak, who’s originally from Argentina and knew Pope Francis when he was a cardinal, said interchanges such as what occurred Wednesday are part of the Gülen movement.

“It’s natural for us,” he said of Gülen identity. “Dialogue is the first step.”

Marion Rogers was impressed. For the resident of Ontario, British Columbia, half the year and Nayarit, Mexico, the other half, San Antonio was the logical stop to make for Yom Kippur.

Rabbi David Komerofsky said networking “breaks down barriers and people’s assumptions of one another. They don’t rely on hearsay and see that we have much more in common.”

Several participants said such exchanges are important, given ongoing Mideast tensions and anti-Muslim hostility in Europe, where so many Syrian refugees have ended up.

Bridge-building is also important at home, where instances of anti-Semitism and Islamophobia have plagued communities, as have anti-Muslim proposals put forth by Republican presidential candidate Donald Trump.

After Sunday’s presidential debate, Muslims responded to Trump’s call for Muslims to report potential terrorism with a Twitter campaign — #MuslimsReportStuff — that mocked him.

But Safak said labels such as “radical Islamic terrorist” have been harmful and have alienated Muslims.

“Muslims are fearful of saying they’re Muslim,” he said.

“We are teachers,” Safak said of the Raindrop Turkish House, which offers music, cooking and Turkish-language classes. “How could people accuse us of being terrorists?”

“On a global scale, things like this are important,” Safak said of the Muslim presence at Yom Kippur. “It’s a small drop in the ocean, but the ripple effects are important.”

On November 13th, 2013, Pacifica Institute’s Portland chapter held its 5th Annual Dialogue and Friendship Dinner having the author-journalist Mustafa Akyol as its keynote speaker. The dinner was attended by Turkish and American academics and businessmen. In his keynote speech centered on his book “Islam without Extremes,” Mustafa Akyol pointed out the fact that Islam is misrepresented.