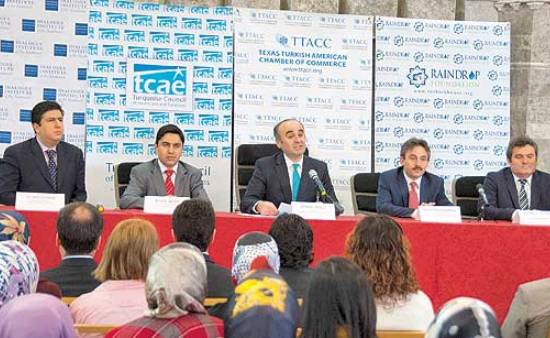 A total of 40 civil society organizations serving in various states of the US under the umbrella of the Houston-based Turquoise Council of Americans and Eurasians (TCAE) have criticized the hateful language adopted by top government officials after a major corruption scandal erupted back in December, saying that society is deliberately being polarized by these officials.

The CSOs held a joint press conference on Thursday in New York to show their disapproval for what they see as the government’s use of hate speech and its launch of a defamation campaign against the Hizmet movement that was inspired by Turkish Islamic scholar Fethullah Gülen. They said that a large-scale propaganda campaign has been conducted against the movement and Gülen by some circles close to the Justice and Development Party (AK Party) government since news of the corruption scandal broke out and implicated three former Cabinet ministers’ sons and many state bureaucrats and well-known businessmen. Government officials have accused the Hizmet movement of participating in a “plot” and using the corruption investigation to damage the government.

TCAE President Kemal Öksüz said that the attempts by politicians to block the ongoing bribery and corruption investigation have dealt a huge blow to rule of law in Turkey. He said that those political interventions have caused serious damage to stability and the peaceful environment in the country. Öksüz also underlined that the Turkish economy is at risk due to some unpleasant developments that have taken place since the corruption scandal erupted.

Stating that he is speaking on behalf of over 40 CSOs, Öksüz strongly criticized the language of hate being used by top government officials and said that they are deliberately polarizing society. Öksüz said that gains in social development over the last few years are being lost due to the undemocratic attitude of government officials. He said that this situation doesn’t comply with the principles of a democratic country.

Indicating that the Hizmet movement and Gülen have been exposed to ruthless and underhanded accusations by circles close to the AK Party government, Öksüz said that the defamation campaign against the movement has upset many people who are serving Turkey. The TCAE president also said that many American intellectuals, who define themselves as friends of Turkey and who have visited the country several times, said the recent developments in Turkey are very concerning and dangerous in terms of the nation’s process of democratization and its bid to become an EU member.

Saying that Turkey’s existence has served as a response to the Western perception that Islam cannot coexist with democracy and social development, Öksüz said, “Unfortunately, the fact that the government has slowed down its democratic initiatives and has been backtracking over the last few years has made people upset” — implying that perhaps Turkey is moving away from its image as a democratic Islamic nation.

The TCAE has directed many activities to promote Turkey in the US, Öksüz said, adding that they were given many congratulations and thanks both from the US and the Turkish Republic for their efforts. He said the organization will continue to direct activities promoting Turkey in the US with pride. The organization’s president also added that the activities and projects of TCAE are inspired by the principles of Gülen.

The Gülen Movement arose among pious men and women who wanted a modern interpretation of religion. In the dynamics of the transformation of the movement, the social milieu also played an important role. The movement became a spiritual refuge for those who searched for an interpretation where Islam was in harmony with modernity. The followers of the Gülen Movement do not describe themselves as a political movement.