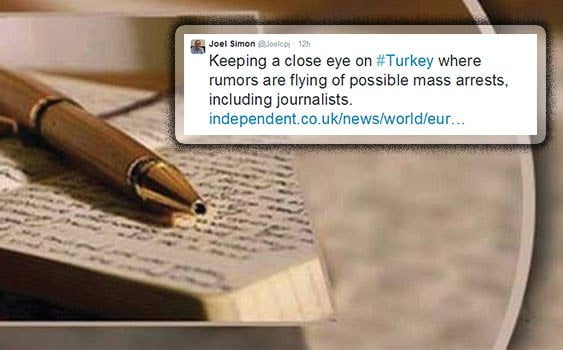 Fuat Avni, an anonymous Twitter user who says he is among President Recep Tayyip Erdoğan’s inner circle, posted a series of tweets on Thursday claiming that around 150 journalists affiliated with the Hizmet movement, inspired by the teachings of Turkish Islamic scholar Fethullah Gülen, would be detained as part of a new wide-scale operation. Avni has previously revealed many government-backed police operations to the public.

The tweets of the whistleblower sparked public outrage, intensifying the already existing concerns over the freedom of press in Turkey.

The Independent daily reported on Avni’s tweets, with the headline “400 critics of Erdogan expected to be arrested, says Twitter user.” The English paper cited Avni, saying that “400 people, including 147 journalists from newspapers known to be critical of Mr Erdoğan and his governing Justice and Development party (AK Party)” would be detained.

The daily also said that what the Twitter user posts is generally taken seriously because the whistleblower is “thought to be among the government’s inner circle and has made reliable predictions about police operations since last year’s so-called ‘17 December’ scandal, which rocked Turkish politics.”

Mashable, a British-American news website, was another international media outlet that covered Avni’s claims in a report headlined “Turkey’s ‘Deep Throat’ warns of plans to detain nearly 150 journalists” on Thursday night. The website, including views from some Turkish journalists, stated that the “journalists identified in Avni’s tweets work for publications critical of the government and linked to a faith-based movement.”

The tech-oriented new site also mentioned successive government-backed operations against the police force in which hundreds of police officers were detained, saying: “Such an operation [against journalists] would not mark the first time Erdoğan’s government has used mass detentions in its attempt to root out Gülen loyalists from influential institutions. More than 100 police officers have been detained this year in order to clean up departments the government suspects are in cahoots with Gülen.”

While there are reports about the possible operation coming from some foreign media outlets, most of the Turkish media has remained silent on the issue. The Doğan Media Group’s outlets, such as the Hürriyet daily, preferred not to cover Avni’s tweets. However, Erdoğan had threatened this media group in a speech about two weeks ago, accusing Doğan of engaging in corruption.

The Sözcü and Milliyet dailies are two other popular media outlets that have not covered the claims, though the Taraf and Cumhuriyet dailies as well as a few other news portals reported on Avni’s tweets.