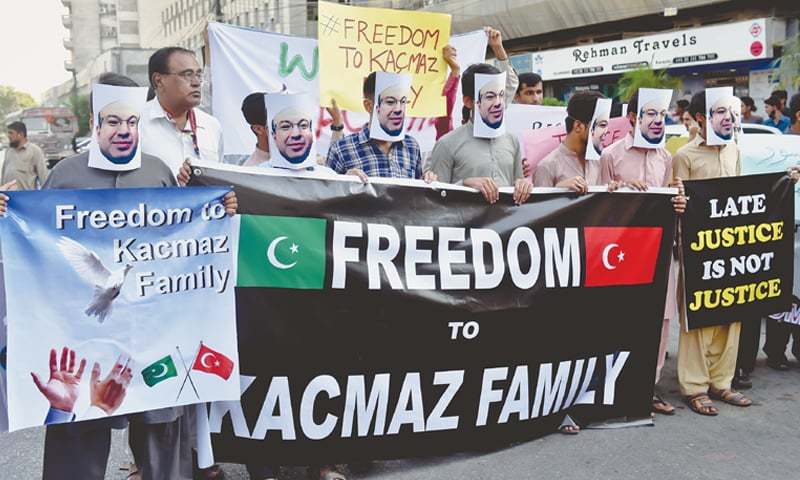 STAFF members of Pak-Turk School’s campus in Karachi on Saturday stage a protest demonstration outside the Karachi Press Club for the recovery of the Kacmaz family, who were recently picked up in Lahore and taken away to an unknown location. —Fahim Siddiqi / White Star

They travel in groups now, never alone; and each time the doorbell rings, they dread the worst. Their homes are beco­ming emptier; personal possessions are being sold off.

The Turkish community here is scared. Teach­ers by profession, they live in identity-less limbo, squa­shed between two countries. They have neither visas for living in Pakistan, nor — for fear of being arrested — can they return to Turkey. After their last visas expired, they did not receive an extension; they were given a stay for a year by the Lahore High Court, and they have UNHCR asylum-seeker certificates.

The fear and insecurity have deepened after the Kacmaz family was recently picked up and taken away to an unknown location. When Fatih Avcu heard a commotion in the home of the ex-principal of the Pak-Turk School, Mesut Kacmaz, he rushed downstairs to see what was happening but was mistakenly picked up too.

“They carried huge guns, but were in civvies, so we don’t know who they were,” says Avcu. “They put black hoods on all of us, even Kacmaz’s wife and teenaged daughters, handcuffed us and drove for around 30 minutes before stopping somewhere. It was a fully furnished house, but I don’t know where we were.” Later, Avcu was told he wasn’t supposed to be there and was dropped blindfolded near his house. “I walked home from the crossing,” he says.

This disturbing incident has left even the small children asking questions. “They hear us talking and ask us if we are also going to be taken by the police,” says Gonul. “We don’t even know whether the family is dead or alive. Mrs Kacmaz, who was my friend, said [earlier] that her husband was being followed and once a man, under the pretext of being from the law enforcement agencies, questioned the landlord about him.”

“On Friday, we were invited to the Kacmaz house, but then she called. She was crying, saying some men were there taking photographs of the place,” says Elif. “On Tuesday night they disappeared.”

For a former director of the Pak-Turk School, Sadullah Bayazit, Pakistan was always a second home. He came here for higher education, and has been here for 21 years now, almost the same length of time as the Pak-Turk School that was established here in the mid-90s. Others have lived here for nearly a decade. But after the coup attempt against President Tayyip Erdogan’s government, Turkey has been pressurising Pakistan to close down the Pak-Turk School and send their foreign staff home.

Initially, funding for the schools came from Turkey. But for the last 15 years or so the chain has been generating its own funds here, offering free education and boarding facilities to 35 per cent of the students, besides awarding foreign scholarships to them. Erdogan accused them of following the Gulen movement, but the management has repeatedly denied this.

In August 2016, the schools’ management removed the Turkish principals of their 28 schools and colleges and dissolved the board of directors which had representation from Turkish nationals. This left them virtually unemployed. Currently there are 17 Turkish families living in Lahore, says Murat Yakut, also an ex-director; he says there are two more in Multan and overall in Pakistan, there are 70 families.

“We were invited here to teach,” says Yakut. “Last year our visa extensions were rejected but how could we leave so quickly and go back to a country that was lying that we were terrorists?” Eventually they got a court stay order and UNHCR certificates. But the stay order is about to expire, and they fear that very soon they may be deported to Turkey.

Yakut shows me some websites that display appalling figures about those in the opposition in Turkey that have either been jailed, or have gone missing. On turkeypurge.com, for instance, the figures roll on to show how many have been jailed, sacked, arrested, detained, and how many offices have been forcibly shut down. The press also faces a grim situation with 302 journalists arrested, and 187 media outlets shut down. Reminiscent of the Gen Zia regime in Pakistan, the Turkish government has been monitoring newspaper headlines, and even manipulating them, says Khalil, who is of Kurdish descent — a community also being discriminated against.

“Actually, the whole thing is nothing but politics,” says Sadullah. “We have nothing to do with politics, we are only educationists.”

The UNHCR did not comment on what has occurred. “We have a well-established policy of confidentiality for individual cases,” says Qaiser Khan Afridi, spokesperson of the UNHCR, Pakistan. He reveals nothing more.

But the Turkish community feels that the Kacmaz family remaining missing is a violation of their basic rights. “At least when someone is arrested, it is a legal action and the reason is known. If they are accusing us of something then we want to know what it is. And we want to tell them that if they send us back to Turkey, they will jail us all, even the women and children. And we know that jail means torture and rape,” says Khalil.