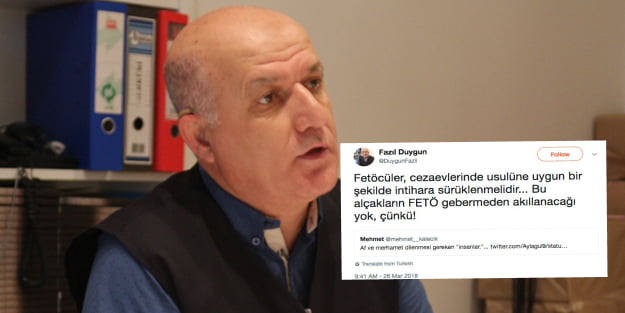 “FETO supporters should be forced in an appropriate way to commit suicide. Because these vile people do not seem to behave sensibly unless they die,” he tweeted on March 26.

Duygun’s Twitter account was suspended later in the day but he has said he is going to continue tweeting via another handle.

The movement denies involvement in the coup and any terror activities.

More than 160,000 people have passed through police custody, of which 60,000 were remanded in prison pending trial over Gulen links since the summer of 2016.

According to a 2017 report by the Sweden-based monitoring group Stockholm Freedom Center (SCF), at least 53 people killed themselves both in and outside of prisons in what it calls suspicious suicides, in the aftermath of the July 15, 2016 failed coup.

The relatives of most of them claim that the detainees are not the kind of people to commit suicide, shedding doubt on the official narrative. Rumors also have it that some of the detainees were killed after being subjected to torture under custody.