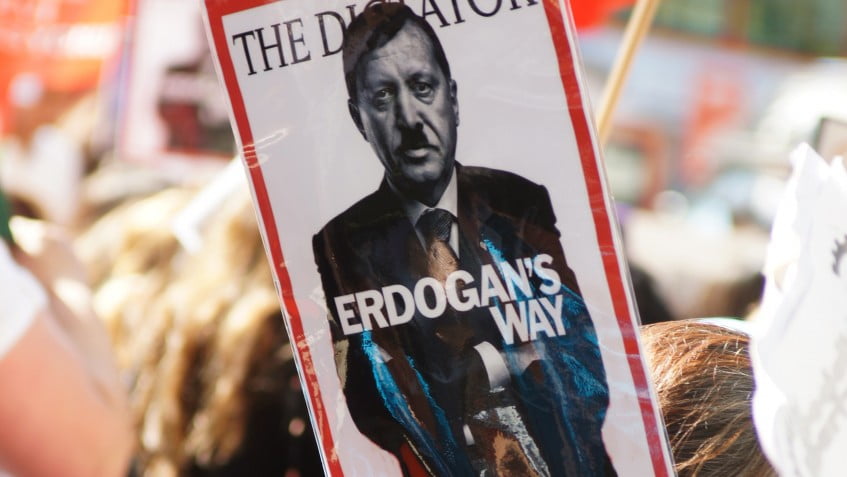 Turkey’s President Erdogan joins the leaders of countries such as Hungary, Belarus, Russia and Philippines, as burgeoning autocrats who grab increasingly more power after being “elected” to govern. These leaders share common tactics that make up an “autocrat’s playbook.”

Erdogan used all these tactics and added a new tool to justify sweeping constitutional changes—a “controlled” or “staged” coup.

Five years ago, on July 15, 2016, a horrific event took place in Turkey as a group of military personnel were mobilized in what appeared to be a coup attempt to overthrow the government. More than 250 people were killed, and more than 2,100 people were injured.

To this day, many details of the tragic event remain shrouded in secrecy and censorship. No independent inquiry has ever been allowed, and the Turkish parliament’s own inquiry has never been released. Many investigative journalists who could illuminate the event were jailed shortly thereafter.

Erdogan has filled that vacuum with propaganda, falsely blaming it on sympathizers of the Turkish preacher Fethullah Gulen—who has been living in self-imposed exile in the United States since 1999. Gulen denounced the coup and its perpetrators as it was happening, has repeatedly denied any involvement, called for an independent international tribunal and pledged to abide by its decision. Erdogan never has responded to this call.

Instead, Erdogan—who called the attempt “a gift from God”—used it as an excuse to persecute hundreds of thousands of innocent civilian Turks, including firing, detaining, arresting, jailing, kidnapping and torturing people simply for association with the peaceful Hizmet movement, which promotes equal access to quality education, interfaith dialogue, mutual respect, and humanitarian relief.

During the years leading to July 15, 2016, Erdogan acquired control of media organizations, enriched loyalist businessmen, and shuffled, fired and even imprisoned prosecutors and judges. By passing overreaching and abusive counter-terrorism laws, he undermined the independence of the judiciary and turned it into an instrument of political punishment.

The July 15 event enabled Erdogan to make sweeping constitutional changes to become an executive president with enormous powers and no accountability. He also was enabled to subjugate the Turkish Armed Forces, which had resisted Erdogan’s politicization efforts until that point.

Appearing on TV that night, Erdogan claimed no pre-knowledge of the incident and immediately blamed Gulen supporters in the military. However, Western governments and observers were not convinced. Experts noted the implausibility of a civilian living on another continent organizing a military coup and not being detected by U.S., Turkish or other intelligence agencies. Indeed, the United States government, despite asking, received no evidence implicating Gulen from Turkey and refused to extradite him. The few military officers who were allegedly linked with Gulen showed signs of torture, and at the court they testified that they were forced to make false confessions while in detention. The British parliament’s investigatory commission noted that there was no publicly available evidence implicating Gulen. Both the United States and German intelligence chiefs publicly stated that Erdogan’s claims against Gulen were not supported by evidence.

The Erdogan government’s propaganda, such as Foreign Minister Mevlut Cavusoglu’s opinion piece published on these pages, often cites—and illustrates through photos and videos—certain sub-events of July 15 as indicators of a vicious attack on democracy. These include the bombing of parliament and the police headquarters, the targeting of civilians, and an alleged assault on Erdogan’s life. What they won’t tell is that while these are horrific events that attract global attention, they serve no purpose in a real military coup and are even counter-productive.

In previous military coups in Turkey, the military started action in the middle of the night in order to avoid civilian casualties, seeing themselves as champions of people against corrupt politicians. For the 700,000-strong Turkish military, NATO’s second largest after the United States, resistance by civilians has never been a concern, contrary to the romanticized photos of citizens climbing tanks. Similarly, never before had the police resisted a military coup, and there was no need to agitate the police force by bombing their headquarters. Bombing the parliament did not make any sense either because opposition parties were represented there. Finally, military coup plotters would be interested in securing Erdogan and bringing him to a court to expose his corruption rather than killing him and making him a martyr.

All military officers who were mobilized on July 15 cite military sources for their mobilization. The most likely explanation for the events of that night is that some high-level military commanders, in collusion with Erdogan, ordered their subordinates to mobilize, only to abandon them to be charged with being part of a coup attempt. These commanders were never investigated. Now that Turkish courts have lost their independence, and both the accused and witnesses are afraid for their safety and that of their relatives, we may never know the truth.

From 2014 to 2020, Turkey slid from “partially free” to “not free” and became the worst perpetrator of transnational repression according to Freedom House. The United Nations Working Groups have issued multiple decisions against Turkey’s transnational kidnappings, declaring them as violating international law and fundamental human rights. The working group on arbitrary detention noted that these systematic kidnappings may constitute crimes against humanity. Turkey’s rank in international indices for judicial independence has been declining since 2014, the first time Erdogan started political purges in the judiciary. In Turkey under Erdogan, “fight with terrorism” has simply become a façade for tactics that terrorize peaceful citizens.

July 15 was no victory of democracy for Turkey, instead, it marked the acceleration of President Erdogan’s massive power grab and his signature contribution to the autocrat’s playbook. For a real victory of democracy, the tens of thousands of civilians who are imprisoned based on guilt-by-association should be released, along with numerous journalists. Perpetrators of torture in the wake of July 15 should be identified and investigated. Over 150,000 government sector employees who were fired with no good cause should be reinstated. Freedom to leave the country for fearful citizens should be restored.