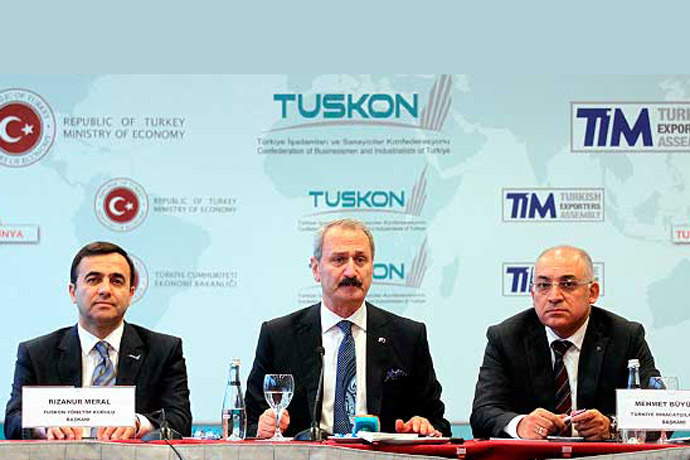 The Turkey-World Trade Bridge summit, a seven-year-old event on its way to becoming an internationally recognized summit, opened its doors to visitors from around the world on Monday. Organized by the Turkish Confederation of Businessmen and Industrialists (TUSKON), the summit, which will run through Nov. 26, is hosting 1,343 foreign and 800 local firms with an estimated 25,000 business-to-business transactions. The TUSKON summit is sponsored by the Economy Ministry and the Turkish Exporters Assembly (TİM).

The minister’s comments come on the heels of efforts to diversify Turkey’s trade markets at a time when demand in traditional trade partners has slumped. “We have no boundaries in branching out into new markets — from Africa to the Americas and Asia-Pacific. We will start talks with 12 new countries shortly, including Japan, Mexico and Canada, for FTAs with each,” Çağlayan told Monday’s TUSKON opening. This is the 18th time the event has opened its doors, and the previous 18 summits saw more than 28,000 foreign and 50,000 Turkish businesspeople participate and enter into trade agreements worth an estimated $26 billion.

Ankara currently has FTAs with 19 separate countries and is carrying out negotiations with 14 others. The EU-candidate country has so far signed deals to avoid double taxation in mutual trade with 83 countries.

The TUSKON summit convenes on the theme of food and agriculture and the participating companies are particularly engaged in these businesses. Underlining the importance the Turkish government attaches to agri-products, Çağlayan said the country’s agricultural production jumped from $24 billion to $62 billion over the past decade. A quarter of all those employed in Turkey work in agriculture or related businesses.

In the last three years the AK Party established their new “center” with the new statism away from the periphery. The Hizmet movement viewed this change as a new centralization and thus a new statism and tutelage with new political and capitalist actors. Due to this change in attitude, the Hizmet movement broke faith with Erdoğan and the AK Party.