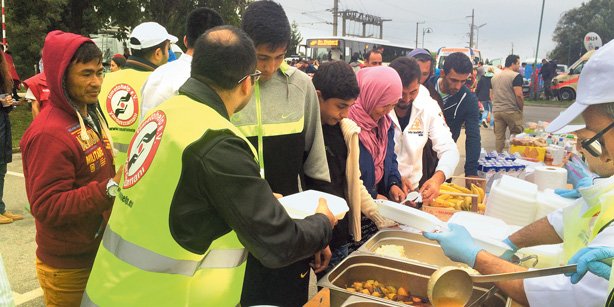 Time to Help, a Kimse Yok Mu project, passes out food to refugees in Nickelsdorf, on the Austrian-Hungarian border. (Photo: Today's Zaman)

Time to Help, a project partner of Turkish charity Kimse Yok Mu, has delivered soup and rice to 1,100 refugees who arrived in Austria from Hungary in the border town of Nickelsdorf and the country’s capital, Vienna.

The charity organized the food distribution during which they were able to use police vehicles to make announcements in Arabic that warm halal food was available for the refugees arriving from Syria, Iraq and Afghanistan over the course of two days.
Nicklersdorf Mayor Gerhard Zapfl shared his appreciation with the charity, and said: “There are about 500 people who are staying at a center and will be going directly to Germany on buses. Another group of people will be boarding trains to Vienna and from there we will send those who want to go, to Germany. There is also a center for those who have been injured and to check if they are in a fit condition to travel. This is today; I don’t know what kind of day we will face tomorrow.”

Waves of refugees have been flooding into Austria from Hungary, totaling 5,500 refugees since Friday night, according to a statement on Saturday by the United Nations Refugee Agency (UNHCR). Many of the refugees are aiming to make their way to the capital city. When the Hungarian border to Austria opened, 11,000 refugees entered Austria and some continued on to Germany on Saturday evening alone. In the past seven months, 250,000 refugees have entered Germany. The number is expected to reach 800,000 by the end of the year.

Recently, the ill treatment of refugees by the Hungarian police hit international headlines, with images of officers beating refugees on train tracks and refusing to let them board trains despite their having tickets. Reportedly, some refugees even become wary of Hungarian citizens and refused offerings of food and water from them.