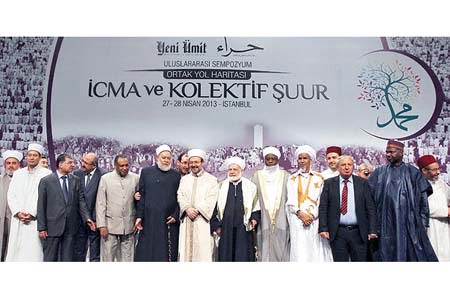 Islamic scholars gathering for the “Ijma as a Common Roadmap and Collective Awareness” symposium pose at the final day of the event. (Photo: Today's Zaman)

The concept of “ijma,” or the consensus of Islamic scholars, is one of the key concepts of the Islamic religion. Of the four basic sources of Islamic law, or the four arguments, “ijma” is fourth after the Quran, the word of Prophet Muhammad and qiyas (deductive reasoning). There are no simple equivalents to the deep meanings contained in this concept. No doubt, the most precise way to translate “ijma” would be to call it “collective consciousness,” the collective consciousness that the Islamic community has been in alliance with over centuries.

The Islamic world is experiencing sectarian strife these days. These clashes are pushing the Islamic world toward bloody clashes. The Western world might be able to declare that these deepening clashes do not concern it; in fact, it might even be pleased at how these clashes are spreading and growing. But in the end, the outcome is not so broken off from the Western world. These clashes wind up increasing violent competition and the fights spread in all directions. It is these same sorts of sectarian clashes that are behind the non-stop flow of blood in both Iraq and Syria.

One factor highlighted by the recent symposium on ijma needs to be underscored, which is that the growing sectarian clashes in the Islamic world derive not from belief, but rather politics. When dynasties, dictator-led administrations and the differing interests of various countries all clash, those wishing to gain an advantage take immediate shelter beneath the shield of sectarianism. When the peoples of various Arab nations became the main political actors as the Arab Spring unfolded, political leaders turned to sectarianism and feelings of belonging to foster support among the people for their causes. When, in countries like Iraq and Syria where the clashes are truly deadly, dispossessed masses take shelter behind the same shields, the clashes of course become the bloodiest yet.

The best way to prevent these clashes is to keep sectarian clashes and differences in belief from being material that politicians can use, and to submit, at the same time, to the authority of various religious leaders on these matters. When politicians do not get mixed up in these matters, Muslims do not spill blood over their beliefs. Throughout history in the Islamic world, politics have been a source of clashes, whilst the collective consciousness delivered by religious, enlightened circles has been a source of compromise and peace — which is how this recent civil meeting in Istanbul, in highlighting the authority and societal leadership of religious leaders and enlightened members, showed the correct path toward peace within the Islamic world.

And thus, this is the need within the Islamic world for the “winds of ijma” referred to by Professor Ahmet Abbadi from Morocco. With these winds filling their sails, Muslims will be able to escape from the swamps of violence that threaten to sink them. Muslims have been crushed under Western colonialism, as well as under the dictatorships using methods foreign to their societies; in the process, a natural sense of justice was lost. It is thus that ijma emerges, as a unique way to rebuild this lost sense of justice in a strong manner. Muslims have a need to live within the framework of a just and fair peace. Political competition creates dissent and injustice. The only solution lies in searching out unity, serenity and justice in the consensus of Islamic scholars, or ijma.

All of which means that there is a greater-than-ever need for Islamic scholars to move further to the forefront in the Islamic world, and for them to make rulings too. With attendance at this most recent meeting on ijma coming from a wide variety of sources, this concept appears to be strengthening, and the meeting was thus an inspirational clue as to the general direction things are taking. The decisions made at the meeting point to a new process underway, in which collective consciousness is strengthening and in which Islamic scholars are moving further to the forefront. The joint declaration, with its five clauses, that was issued at the end of this meeting contained information on many new projects. It appears that Muslims will find unity and peace not at political rallies in city squares, but rather in the alliance of their enlightened scholarly leaders.