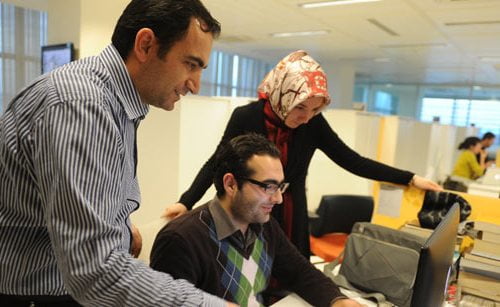 “I am speaking frankly. As a prime minister who was jailed for reciting a poem, I will not agree to let anyone do time because of his or her thoughts, views and writings. I will not consent to turn a blind eye to an act of brutally murdering anyone for their opinions and remarks,” Prime Minister Recep Tayyip Erdoğan said while celebrating the 25th anniversary of the Zaman daily in January 2012.

He later said that his Justice and Development Party (AK Party) government would “not let the pain and suffering experienced in the past recur now or in the future.”

These words belong to Erdoğan, who broke his promise when he sued Today’s Zaman journalist Mahir Zeynalov and deported him from Turkey to his native Azerbaijan without a court decision, just because he voiced views that the Prime Ministry Coordination Center (BİMER) said are “against the state and government.”

Forgetting his past and moving in the opposite direction, Erdoğan intended to tyrannize others — the same way he was treated years ago in this country. Though he’d stressed that one of his main goals was not to let the pain of the past return, he brought the past to the present and even curbed freedom of speech as burdensome to his native Turkey.

Since the early days of his government, building an atmosphere full of threats and smear campaigns that never let writers feel free to express their thoughts and feelings the way they wanted to, Erdoğan drew a red line in the media, acting arbitrarily, according to his moods. Unable to take criticism, he instead resorted to curtailing freedoms and limiting others’ liberty.

Thus, in a conflict between Erdoğan’s honor and freedom of speech that has been escalating since the start of the battle between Erdoğan and the Gülen movement, honor won the victory.

Mahir’s deportation should not only be evaluated within the framework of the increasing constraints of freedoms in Turkey, as it is a new start in the AK Party-Gülen fight to the finish. It will definitely lead to the opening of further chapters in this controversy, which will probably turn into a long, drawn-out serial.

Erdoğan removed Mahir from Turkish soil and left all foreign journalists, particularly Azerbaijanis, living and working in Turkey under a huge cloud of suspicion. As a person sharing Mahir’s nationality, I already feel insecure and uncomfortable in Turkey, a country that I have always felt a strong sentimental attachment to. Mahir said the same in his reflections on the nightmare he has been going through since Feb. 4.

Turkey was the only country and İstanbul the only city that I wanted to live in aside from my hometown of Baku, Azerbaijan, as like almost all Azerbaijanis, I always felt myself at home in Turkey. Although my passport is not the same color as those of Turkish people, I have always felt myself a Turk; throughout the years I, together with Mahir, have always shouldered the same patriotic responsibilities as Turkish people, who most Azerbaijanis see as Turkish Azeris, not as “others.” And right now I wish Turks to shoulder the responsibility of our safety, and in this case Mahir’s, to rescue him from Erdoğan’s despotism, so that we can feel at home in Turkey, as we did before.