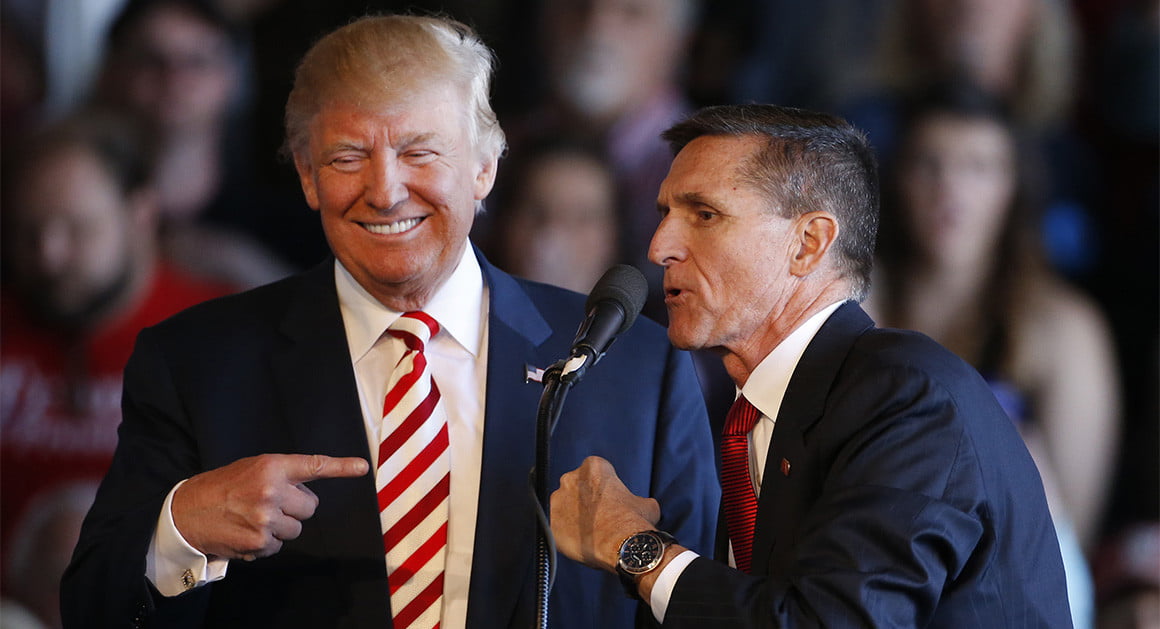 WASHINGTON — Michael T. Flynn, President Trump’s first national security adviser, acted as a foreign agent representing the interests of Turkey’s government in exchange for more than $500,000 during last year’s campaign even as he was advising Mr. Trump, according to disclosure forms filed this week.

Mr. Flynn, a retired Army lieutenant general, was hired by a prominent Turkish-American with ties to the government of President Recep Tayyip Erdogan, who has engaged in a widespread political crackdown after surviving a military coup attempt. Mr. Flynn was assigned to investigate Fethullah Gulen, a Turkish cleric who lives in Pennsylvania and was blamed by Mr. Erdogan for helping instigate the July putsch.

Mr. Flynn registered as a lobbyist last year but did not file papers registering as a foreign agent until Tuesday, providing a fuller understanding of his work. A White House official said on Thursday that Mr. Trump was not aware that Mr. Flynn was working for Turkey’s interests during the campaign but deflected questions about its propriety.

Mr. Flynn signed a contract for the work just three weeks after delivering a fiery speech at the Republican National Convention endorsing Mr. Trump and leading “lock her up” chants advocating the imprisonment of Hillary Clinton for her use of a private email server while secretary of state. Without disclosing his financial interest, Mr. Flynn published an op-ed article on Election Day arguing that Turkey was misunderstood and assailing Mr. Gulen as “a shady Islamic mullah” and “radical Islamist.”

The contract terminated after the election, when Mr. Flynn went on to become Mr. Trump’s national security adviser. He was forced to resign after just 24 days when it was revealed that he had misled Vice President Mike Pence and others in the White House about the substance of a telephone conversation he had with Russia’s ambassador.

Mr. Flynn registered as a lobbyist last year but did not file papers registering as a foreign agent until Tuesday, providing a fuller understanding of his work.

A White House official said on Thursday that Mr. Trump was not aware that Mr. Flynn was working for Turkey’s interests during the campaign but deflected questions about its propriety.

“He was a private citizen at the time,” Sean Spicer, the White House press secretary, said. “And when you’re a private citizen, you’re allowed to engage in legal activities. I don’t have anything further on that, but I think there’s nothing nefarious about doing anything that’s legal as long as the proper paperwork is filed.”

Mr. Pence, however, seemed less forgiving. “The first I heard of it,” the vice president said when asked about stories on the matter during an interview on Fox News on Thursday night, “and I think it is an affirmation of the president’s decision to ask General Flynn to resign.”

Democrats have raised concerns about Mr. Flynn’s private lobbying since last fall, including his decision to accept a fee reported around $40,000 to attend and speak at a Moscow gala celebration honoring RT, the Russian government-financed, English-language television network viewed in the West as a propaganda organ.

“Lt. Gen. Flynn’s involvement in advising Mr. Trump on matters relating to Turkey or Russia — including attending classified briefings on those matters — could violate the Trump for America, Inc. Code of Ethical Conduct,” Representative Elijah E. Cummings of Maryland, the top Democrat on the House Oversight and Government Reform Committee, wrote Mr. Pence after the November election.

In a letter to the Justice Department this week, Mr. Flynn’s lawyer said that he did not initially register as a foreign agent because the firm that hired him was not a foreign government. But the lawyer, Robert K. Kelner, said Mr. Flynn had decided to register retroactively “to eliminate any potential doubt” because “the engagement could be construed to have principally benefited the Republic of Turkey.”

On behalf of his firm, the Flynn Intel Group, Mr. Flynn signed the contract on Aug. 9 with Inovo, a Dutch firm owned by Ekim Alptekin, chairman of the Turkish-American Business Council. Mr. Flynn’s firm was to receive $600,000 for 90 days of work. His initial registration as a lobbyist last year indicated he would receive less than $5,000 for lobbying, although that presumably indicates that he did not define most of the services he would provide Mr. Alptekin as lobbying under the law.

Mr. Alptekin has ties to Mr. Erdogan’s government. In documents disclosed by the anti-secrecy group WikiLeaks, Mr. Alptekin emailed frequently with Egemen Bagis, the former Turkish minister for European Union affairs. In one email in 2013, Mr. Alptekin sent an article from The Wall Street Journal that Mr. Bagis then forwarded to Berat Albayrak, Mr. Erdogan’s son-in-law and now the country’s energy minister.

This week, Mr. Alpetkin disputed the notion that he hired Mr. Flynn to influence the next president. “When I engaged Flynn Co. polls showed 85% likelihood of Hillary winning,” he wrote on Twitter after the filings. “If intention was to lobby USG I would have hired Podesta like Gulen,” he added, referring to the United States government and Tony Podesta, a prominent Washington lobbyist and brother of John D. Podesta, who was Mrs. Clinton’s campaign chairman.

The forms filed this week indicate that Mr. Flynn’s firm was “to perform investigative research” on Mr. Gulen and “develop a short film piece on the results of its investigation.” Mr. Erdogan has demanded that the United States extradite Mr. Gulen, which the Obama administration refused to do. In the end, the forms said, the video was never completed and Mr. Flynn’s firm received $530,000 of the promised fee before the contract terminated in November.

During the course of the work, Mr. Alptekin introduced Mr. Flynn to Foreign Minister Mevlut Cavusoglu and Mr. Albayrak, the president’s son-in-law, in New York on Sept. 19, the forms said. The forms said Mr. Flynn decided to write his Election Day op-ed piece “on his own initiative” and not at Inovo’s request, although they said that he shared a draft of it with Inovo before it was published.

In the piece, published by The Hill, a newspaper targeted at members of Congress and their staffs, Mr. Flynn castigated the Obama administration for protecting Mr. Gulen.

“To professionals in the intelligence community, the stamp of terror is all over Mullah Gulen’s statements,” he wrote. “Gulen’s vast global network has all the right markings to fit the description of a dangerous sleeper terror network. From Turkey’s point of view, Washington is harboring Turkey’s Osama bin Laden.”

The Hill appended a note to the online version of the piece after this week’s filing. “Neither General Flynn nor his representatives disclosed this information when the essay was submitted,” the note said.

The filings this week contradict past assertions by Mr. Alptekin, who told The New York Times in an interview after the November election that the contract with Mr. Flynn was worth “tens of thousands of dollars, not hundreds of thousands of dollars.” In the same interview, he said that Mr. Flynn “never consulted with me” about the op-ed article in The Hill and that he “would have advised against it.”

Mr. Alptekin repeated the latter assertion even after the filings this week. “For the record: nobody remotely linked to the Gov. of Turkey knew about Gen. Flynn’s article in advance and I wasn’t consulted either,” he wrote on Twitter.

Mr. Flynn opened the Flynn Intel Group in October 2014, two months after he was forced out as director of the Defense Intelligence Agency. The business was opaque, making little public, not even an address. When a reporter went looking for it last fall, he tracked it down to an Alexandria office building operating out of the nondescript headquarters of another firm, called the White Canvas Group.

In an interview with The Times in October, Mr. Flynn offered only a vague description of the firm. He said he had clients in Japan and the Middle East and that “we do cybertraining. We have an exceptional cybertraining program.”

He added: “That’s what we do. And we also support aviation operations, so we have some aviation logistics that we do. And we do some security consulting and we are also involved in the energy business.” He declined to specify clients, saying he had nondisclosure agreements with them. “I have international clients and I have some clients right here in the United States,” he said.

According to this week’s filings, the firm was shuttered after the election when Mr. Flynn was headed for the White House.

* Title of the news has been changed by HN. Original title is “Michael Flynn Was Paid to Represent Turkey’s Interests During Trump Campaign”