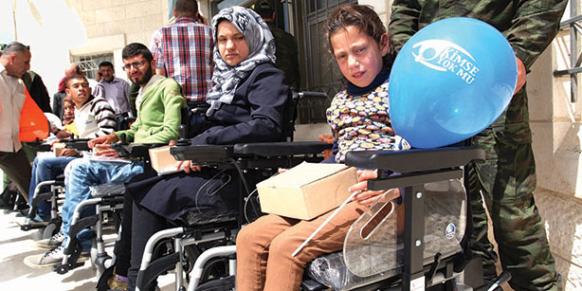 “Turkey does not impose visa requirement on Israeli citizens. But Palestinians are being subjected to strict visa requirements. A Palestinian needs to have a substantial amount of money in his bank account in order to get a visa. Most of them, naturally, cannot find this money. For instance, we wanted to bring a woman to Turkey for treatment, but she was denied a visa,” Tokak said on a live Bugün TV program on Monday night.

Tokak accused the ruling Justice and Development Party (AK Party) officials of creating the image of being a friend to Palestine while they clandestinely create difficulties, even in instances that could save lives.

“What you hear [from AK Party officials] at party meetings and what is going on behind the scenes is different. They should not, at least, prevent us from helping those people in need,” he added.

Kimse Yok Mu, which has UN Economic and Social Council consultative status, is one of the charitable organizations that provides the most help to Palestinians. According to the charity’s official data, in the aftermath of the 2014 Israel-Gaza conflict, also known as Operation Protective Edge, during which almost 1,000 Palestinians were killed, the charity supplied aid to more than half a million people in the region. However, the AK Party government has recently extended an ongoing campaign targeting the faith-based Gülen movement, also known as the Hizmet movement, to Kimse Yok Mu, investigating its activities because the movement inspires the work of the aid organisation.

Tokak said that the organization is able to explain what each and every kuruş (cent) is spent on. Challenging the government by saying, “They can try us in any court they want,” Tokak underlined that despite a yearlong investigation into Kimse Yok Mu, the government has not been able to find a single piece of evidence pointing to fraud.

“We just laugh away those who accuse us of being a spy [organization] secretly working for Israel. I have been living in Jerusalem for two years. I love living there. But I am there for a duty: opening schools [and] hospitals in the Palestinian territories, helping those in need. Israel will never accept us. They have not so far and they never will in the future. But Jerusalem is currently under Israeli domination. Thus, all aid from Turkey must go through Israeli customs. We, therefore, get official permission from them and bring aid to Palestinians,” he said.

Greek journalist Thomas Sideris has lashed out at a shocking investigation being conducted by the Ankara Chief Public Prosecutor’s Office against Kimse Yok Mu on charges of terrorism, defining the probe as “insolence.”

Speaking to Today’s Zaman on Monday, Sideris said that Kimse Yok Mu is being accused based on a baseless indictment as if it were a terrorist organization that has neither conscience nor complies with national and international law. “Those who read [Fethullah] Gülen’s writings can easily understand that he condemns all kinds of terrorism. The Hizmet movement promotes toleration and dialogue. In that sense, it is a worldwide movement. The accusations against Kimse Yok Mu are baseless and nonsense,” Sideris said.

Kimse Yok Mu, which is inspired by the teachings of Turkish Islamic scholar Fethullah Gülen, has become a target in a battle launched by the AK Party government against the movement. Several pro-government media outlets are carrying out a smear campaign, with publications accusing the charity of engaging in illegal fundraising activities and other crimes. The government has accused the Hizmet movement of plotting against it; however there has been no evidence to support the claims and the movement denies the accusations.

The Turkish wing of the UK aid group Doctors Worldwide and Turkish charity Kimse Yok Mu (Is Anybody There) are set to extend a helping hand to the people in Gaza, which has been experiencing Israeli attacks since Wednesday. A written statement from Kimse Yok Mu has said that the foundation is preparing to send […]