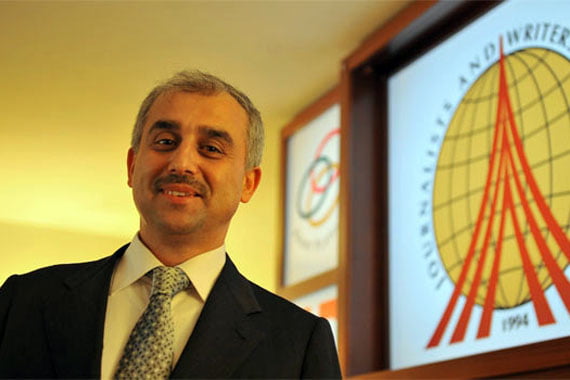 An 11-article statement released by the Journalists and Writers Foundation (GYV) on Tuesday in response to a series of controversial claims and slanderous accusations made about the Hizmet movement has received appreciation and applause from many who said the statement is a good response to those who wish to create conflict between the Justice and Development Party (AK Party) government and the Hizmet movement.

In its statement, the GYV said the allegations about the movement are designed to pit the government against the movement and create tension between the two.

Currently there is a lot of talk on social media and among some media circles about an alleged and growing tension between the Hizmet movement, inspired by Turkish-Islamic scholar Fethullah Gülen, and the government.

GYV listed a total of 11 widespread allegations against the movement and gave responses to each of them.

The allegations directed at the movement include the following: It was behind the Gezi Park protests, which sparked off in May in protest of government plans to demolish Gezi Park in İstanbul’s Taksim Square; it is not against the coup in Egypt; and it is against the settlement process that aims to resolve the terrorism problem in the country. In addition, there are claims about Hizmet’s alleged efforts to manipulate politics and shape the political landscape in Turkey.

The foundation responded to each of these claims and referred to the statements of Gülen in order to prove the invalidity of the accusations.

Gülen is highly respected both in Turkey and in many countries around the world for the educational activities he has pioneered, along with his efforts to promote intercultural and interfaith activities around the globe. He is in self-imposed exile in the US.

In remarks to Today’s Zaman, AK Party Adıyaman deputy Mehmet Metiner said by releasing Tuesday’s statement, the GYV has taken a very valuable step that “spoils the games of some evil circles that want to create hostility between the government and the Hizmet movement.”

“We are faced with a perfect operation to create division. Those who think they cannot overthrow our government in another way are trying to lead to a confrontation between our government and the Hizmet movement. They want to break the power of each of us by leading us to a new Battle of Siffin [the first Muslim civil war],” said Metiner, adding that is grateful to the GYV for its statement, which he said “is a strong answer to those who want to foment the fire of hostility.”

“In democracies, governments come to power through elections and leave power only through elections. Nonetheless, citizens and actors of civil society have the right to criticize and make suggestions on any subject between the two elections and this cannot be seen as interference in state administration,” the GYV explained.

When contacted by Today’s Zaman, GYV Chairman Mustafa Yeşil said the foundation has received very positive reactions to its 11-article statement, adding that many people found the statement an “honorable” and “courteous” one.

“This statement was not made to prepare the ground for a fight or out of negative intentions. This statement was made when Hizmet’s remaining silent in the wake of allegations that completely ignore its principals, values and philosophy has begun to be perceived as a sign of desperation and acceptance. The statement only aims to reveal facts and give the accurate information regarding the allegations about Hizmet,” Yeşil said.

According to Professor Vedat Bilgin, a political analyst and writer, the GYV’s statement will help block efforts aiming to create tension between the government and the Hizmet movement.

“I think every person, institution and civil society organization that is committed to democratic values should be open to attempts of disunity. By responding to reckless allegations with an open heart, the Hizmet movement has once again emphasized the values it supports. One of the main characteristics of unity and integrity is openness and sincerity. With its 11-article statement, the GYV did this with very appropriate answers,” he said.

The GYV’s statements came at a time when claims about an alleged and growing tension between the government and the movement have intensified. A report in a Turkish newspaper on Tuesday even claimed that Prime Minister Recep Tayyip Erdoğan is trying to get the votes of followers of the Hizmet movement for next year’s local elections. One of the surveys carried out to this effect has found the vote of the Hizmet movement to be at three percent, according to the daily.

AK Party Deputy Chairman Mustafa Şentop, who spoke at a meeting of his party at the AK Party headquarters in Sütlüce, İstanbul, on Tuesday, also commented on the GYV’s statement, saying the statement is a message to those who want to create conflict between the government and the Hizmet movement.

“I read the GYV’s statement. I am a member of the Abant Platform [an independent think tank that has tackled pressing issues facing Turkey since its establishment in 1998]. Those who are uncomfortable about the AK Party’s being in power and see that there is no alternative to the AK Party in the short run aim to create the impression that there is an environment of disunity within and in the grassroots of the AK Party. As it is with political parties and communities, there is not a uniform structure in civilian movements. There are people with different views,” Şentop said, adding that there is no conflict among the supporters of the AK Party in Turkey.

According to writer and journalist Etyen Mahçupyan, statements like that of the GYV should have been made earlier as Hizmet’s silence in the wake of the controversial allegations was putting the entire Hizmet community under a cloud of guilt.

“I think the GYV’s statement is a deterrent for those who want to create speculation over Hizmet. The content of the statement did not surprise me. The text was the kind of one which repeated the attitude and principles of the movement,” Mahçupyan said.

Nazlı Ilıcak, a journalist and writer, said she finds GYV’s statement a very positive one, adding that claims have always been made about the Hizmet movement’s alleged efforts to weaken the AK Party government.

“Unfortunately, even some figures close to the AK Party have begun to believe in these allegations. … When columnists of the Zaman daily criticized the government, efforts were made to create the impression that there was a war between the government and the movement. Some figures close to Erdoğan pioneered this in order to highlight themselves,” she said, adding that some figures in the bureaucracy were unfortunately removed from their posts due to their ties with Hizmet.

Ilıcak called on the AK Party government to respond to criticisms with maturity and should not have doubts about a movement whose only goal is to serve the country.

In the last three years the AK Party established their new “center” with the new statism away from the periphery. The Hizmet movement viewed this change as a new centralization and thus a new statism and tutelage with new political and capitalist actors. Due to this change in attitude, the Hizmet movement broke faith with Erdoğan and the AK Party.