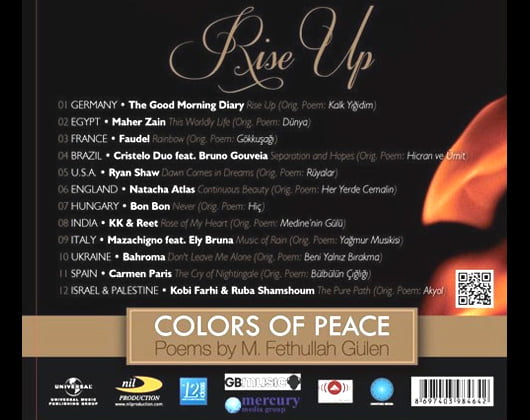 A new song album of Fethullah Gulen’s English-translated poems has been released. The album titled “Rise up-Colors of Peace,” featuring poems by Gulen composed into songs, has been released jointly by Nil Production and Universal Music after two years of recording.

The album took Nil Production in cooperation with world’s largest music company Universal Music two years to finalize. Each singer was sent a collection of 50 poems by Fethullah Gulen to compose and vocalize the one of their choice in their own countries and studios.

“Rise-up, Colors of Peace”, distinguished as a ‘world album’ featuring a diverse music including rai, flamenco, Indian, jazz, pop besides authentic instruments, includes Gulen’s poems, namely : Dreams, the World, the Rose of Medina, Rise up, Separation and Hope, Continuous Beauty, Never, Rainbow, Don’t Leave me Alone, Cry of a Nightingale and The Pure Path from his poetry book Broken Plectrum. It is now on sale at music stores simultaneously in Turkey and around the world through distribution channels of Universal Music.

In the press conference of the album the producers noted that “It is literally a polyphonic and multicolored album calling for peace through the universal language of music at a time when fighting is cried out. Music-peace fusion dates back to dawn of humanity. Music and peace are just like two voracious travelers on their way. To date, they have been side by side for most of the time. They have meant a symbol to some or awareness and hope to others. Every tune composed for the sake of peace has sung the same to people: ‘voice of conscience’.”

International charity organization Kimse Yok Mu extended helping hand to orphanages in Mongolia during the holy month of Ramadan. Monoglian officials also thanked to the KYM and Khen ch baikhgui for their efforts and presented certificate of appreciation them.