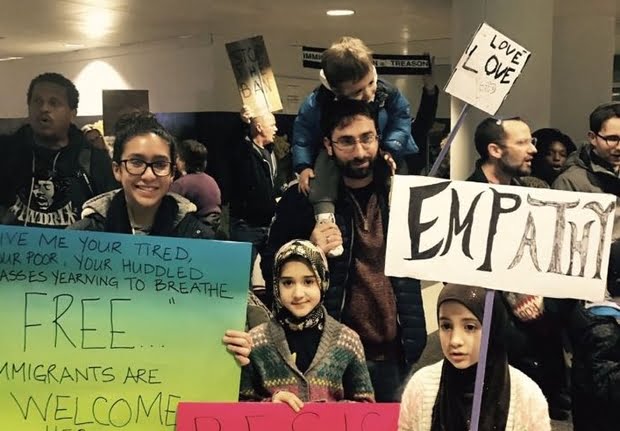 A photo of Fatih Yildirim’s protest beside a Jewish family took America by storm. Back home the reaction was very different

It was a picture that melted hearts around the world. Two dads – one Muslim, one Jewish – with their kids on their shoulders, united against Donald Trump’s executive order banning citizens of seven countries from travelling to the United States.

But for Fatih Yildirim, the Muslim dad in the picture, becoming a viral sensation has been bittersweet. While he was lauded in global media outlets as diverse as Time and Good Housekeeping, back in his native Turkey Yildirim became the subject of a hostile media campaign that branded him a terrorist.

His experience is a reminder of the often topsy-turvy nature of politics in Turkey, a Muslim-majority country that has high hopes for Trump’s presidency.

It is also a personal story about how families have been ripped apart by one of the most spectacular political rifts in the country’s modern history. The photograph has put his already strained relationship with his family in danger of permanent rupture.

This. This is a picture. pic.twitter.com/TaUrKyjFiY

“Because this picture came out, I lost my last remaining ties with my family,” he said. “I’m scared to call my dad or mum now.”

Yildirim, a warehouse manager, is part of a deeply contentious group known as the Gulen movement. Founded by Fethullah Gulen, an Islamic cleric from northeastern Turkey, it began amassing supporters from the late 1960s.

By emphasising the importance of education, over several decades Gulen forged a network of high-achieving but secretive followers who went on to secure jobs in the bureaucracy, the judiciary, the military and the police.

When President Recep Tayyip Erdogan’s AKP party came to power in 2002, it forged a marriage of convenience with the Gulen movement. By harnessing the strength of its followers, the party was able to push back against those in the state structure opposed to its open embrace of Islam.

Hundreds of officers were purged from the military in cases that were later shown to be based on thin or fabricated evidence.

Yildirim, now 37, became a follower of Gulen when he was in high school after being introduced to the movement by a friend.

He has lived in the United States since 2002 after first travelling there on an exchange programme. He met his future wife, Amy, while working in a pizza restaurant. They got married, had three children and lived what Yildirim describes as a normal, quiet family life in Schaumburg, a suburb of Chicago.

Back in Turkey, the relationship between the Gulen movement and the ruling AKP was growing increasingly fraught.

In 2013, it imploded. Leaked recordings, apparently taped by Gulenist police officers, allegedly showed corruption reaching right to the heart of Erdogan’s inner circle. The former allies were now publicly at war. Erdogan accused the Gulen movement of forming a “parallel structure” inside the state and vowed to flush it out.

Yildirim’s family, staunch supporters of the AKP, grew ever more upset by his continued devotion to Fethullah Gulen. In 2015, the father-of-four lost his job as a sales and ticketing agent with Turkish Airlines, the national flag-carrier — a decision Yildirim believes was based on his links to the movement. His mother and father had no sympathy.

“They said you got what you deserved,” he said. “Since then, things became difficult. They made it very clear.”

The government claimed that the plot was masterminded by Gulen, who since 1999 has lived in exile in a mountain retreat in Pennsylvania. For Yildirim, that meant that the tensions with his family grew worse.

The rise of Trump

Just four days after the failed coup, Donald Trump won the Republican nomination. Having previously bristled at the billionaire businessman’s calls for a ban on Muslim immigration to the United States, Erdogan began to warm to him.

It emerged that members of the Gulen movement had donated to the campaign of Hillary Clinton and the Clinton Foundation. Trump, meanwhile, praised the Turkish leader for his “impressive” success in thwarting the attempt to overthrow him – and dodged a question about human rights concerns.

Less than a month after Trump’s inauguration, analysts warn that Ankara’s hopes will almost certainly end in disappointment. The idea that his administration will reduce US support for Syrian Kurdish forces, seen by Turkey as a grave threat to its own national security and stability, already seems likely to be misplaced.

But for now, Turkish officials and pro-government media appear to be pursuing a wait-and-see policy. It was left to the prime minister, Binali Yildirim, to criticise the controversial travel ban. Erdogan has said that some of the new president’s language is “disturbing” but has also praised him for publicly chiding a CNN reporter.

It was into this context that the photo of the protest at Chicago’s O’Hare airport emerged. While international media leapt on the image of Yildirim and Rabbi Jordan Bendat-Appell as a symbol of interfaith harmony, Turkey’s pro-government outlets branded Yildirim a member of the “Gulenist Terror Organisation”, known in Turkey as FETO.

The channel 24 TV, owned by a businessman who once said that was “in love” with Erdogan, hinted at a wider conspiracy. Its news report asked: “After the defeat of Hilary Clinton, who they openly supported, what kind of role is FETO going to play in protests aimed at weakening Donald Trump?”

Melih Gokcek, the mayor of Ankara, claimed that Gulenists were working in conjunction with the billionaire financier George Soros to undermine the new president.

Yildirim says openly that he is a supporter of the Gulen movement but dismisses the claim that his protest was somehow orchestrated by the group as “nonsense”.

He and his wife made a spur-of-the-moment decision to join the airport demonstration, he said.

“We were following on the news, we saw the protests. My wife went on the woman’s march in Chicago. I said why don’t we go and take some cookies to those lawyers giving pro bono services. She said it was a great idea.”

“The Turkish media is trying to manipulate the situation but it’s not true. No one sent me there.”

He rejects the label that he is a terrorist. He also says that he remains “unconvinced” by the Turkish government’s accusations against the Gulen movement, insisting that he has never seen any evidence of wrongdoing or criminal activity.

That view of the group would be challenged by the many prominent Turks convinced that they were targeted by the opaque network. While questions remain about the coup, British ministers and diplomats have said repeatedly that they believe the movement had a hand in it.

Alan Duncan, a foreign office minister, told the foreign affairs committee last month: “It’s very clear that there were many Gulenists involved in the coup, but we don’t have the information or evidence to decide definitively.”

Yildirim believes that the Turkish campaign against him was an attempt by the Turkish government to turn the Trump administration against the Gulen movement.

He said: “I think they’re trying to use me to say to the Trump administration: ‘Look this movement here is working against you. So you should persecute them or extradite Gulen’.”

Swept up in the moment

The biggest blow for Yildirim was personal. While he was able to shrug off some negative news stories, Yildirim fears the damage with his family may be far more lasting. He does not know if he will speak to his parents again.

He had no idea the photograph would capture the world’s imagination in the way that it did. “I didn’t know it was going to go viral,” he said.

“How could I know? I thought I was doing something normal. I didn’t think I was doing anything extraordinary – and I still don’t think that. We weren’t saving someone from a fire, or a river. We were just standing up for human rights.”

He has asked himself if it was a mistake to give his name to the photographer but, ultimately, he believes that the picture has done more good than harm.

It shows, he said, that “all these minorities, all these oppositions, can get together and stand up for something.”

“It is bad for me but around the world it is creating a better image,” he said. “I’m happy to be part of it.”