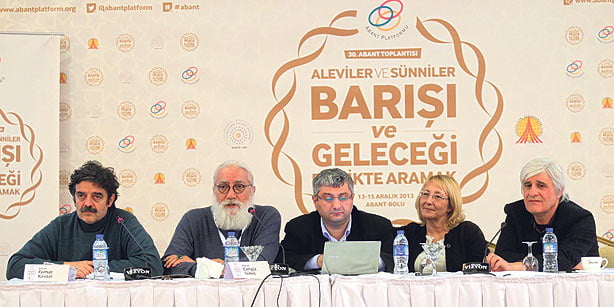 A group of participants are seen on Sunday at the 30th Abant Platform meeting, which focuses on Alevi-Sunni relations. The meeting is organized by the Journalists and Writers Foundation. (Photo: Today's Zaman, Turgut Engin)

At the end of the three-day Abant Platform meeting on Alevi relations with Sunnis, one of the fragile fault lines of Turkish politics, Alevis raised their voices higher, demanding equal citizenship against the backdrop of several past and present disappointments with the state.

The pursuit of the end of discrimination both at the government level and in society, as well as the request for basic freedom of religion, was the recurring theme of the speeches and debates. The participants, both Alevi and Sunni, agreed that basic rights and freedoms should not be a bargaining matter or perceived as something to be granted by the state because Alevis are asking for their natural rights.

The final declaration of the meeting, titled “Alevis and Sunnis: Searching for Peace and A Future Together,” urged the state not to record people’s faith or ascribe an institutionalized identity to religious groups, based on the principles outlined by the Venice Commission, the advisory body on constitutional matters to the Council of Europe (COE).

Moderating a session on Saturday, former Minister of Culture and Tourism and Justice and Development Party (AK Party) İzmir deputy Ertuğrul Günay said that a state attitude that categorizes citizens according to religious belief and imposes religion on people continues.

According to him, equal citizenship and equality in the law have not yet been realized. “One of the biggest deficiencies of the 90-year-old republic is not reaching equality” in terms of citizenship, Günay pointed out.

Former AK Party deputy Reha Çamuroğlu criticized the Alevi workshops held by the government in recent years and said that the final report from the workshop only says what not to do to solve the problems of Alevis. He argued that the workshop report assumes that Alevis are fools. He added that the obstacle to Alevi demands is not the impossibility of their demands, but rather the resistance of other citizens.

The final declaration also underlined the Alevis’ grave disappointment in the Alevi workshops and referred to the traumatic history — particularly the Alevi massacres in the 16th century — that continues to be an impediment to building a better future living together.

According to Çamuroğlu, Alevis need not search for a solution, since the solution is self-evident: a fully democratic state.

Academic Savaş Genç from Fatih University suggested that Alevis and Sunnis advocate for each other’s rights and lobby for one another.

An Alevi dede (religious leader), Hüseyin Dedekargınoğlu, stated that Alevis’ problem have a problem with the state and listed their demands: the legal recognition of Alevi houses of worship (cemevis), the abolition of required religion courses in schools and an end to discrimination against Alevis, especially in government hiring practices. “Some treat Alevis as stepbrothers who are asking for a share of the family inheritance,” he commented. He added that Alevi problems are not unsolvable since they are not asking for territory or a separate flag, merely equal citizenship.

State should be impartial

Cafer Solgun, a Today’s Zaman columnist and president of the Association for Confronting the Past (Yüzleşme Derneği), said that the state must recognize equal citizenship, as it cannot be an issue of negotiation.

Touching upon the involvement of Alevis in the Gezi protests, Solgun said, “It is true that it was mostly Alevis who participated in the events, because they are the ones who suffer most and are most fearful.” According to him, Prime Minister Recep Tayyip Erdoğan’s statement that his government is going to raise a religious generation led to concerns among Alevis, as well as the decision to name the third bridge over the Bosporus after Ottoman Sultan Selim I (Yavuz Sultan Selim), since he is an object of hatred for them due to the massacre of Alevis in his era.

Solgun also severely criticized the Religious Affairs Directorate for using everyone’s tax revenue only on Sunnis and asked, “What kind of a Muslim are you?” to emphasize the injustice of not spending Alevi tax monies on Alevis as well as Sunnis.

The final declaration of the 30th Abant meeting also called for the restructuring of the Religious Affairs Directorate as an independent foundation with state support and called for the establishment of similar foundations for other faith groups.

Despite the vivid collective memory among Alevis of the Ottoman era and the massacres they were subjected to, there were also positive current examples of relations. The Alevi imam from the first joint mosque-cemevi project in Fatsa, Ordu province, Ali Rıza Güvenkaya, spoke about the peaceful coexistence of his Alevi and Sunni congregation.

Underlining the diversity of Anatolia in terms of faith, Doğan Bermek, president of the Federation of Alevi Foundations, said that despite the plurality in these lands, Alevi religious rights are being violated.

“If the state stops supporting religious groups it is no problem for us, but if it continues to fund religious groups, all faiths should benefit from that,” Bermek pointed out. He also asked for the return of Alevi properties in Anatolia confiscated by the state.

Criticizing the state policy of profiling its citizens, Bermek also said that Alevis are subject to discrimination in state bids, especially at the local level. He believes that the state’s failure to keep its promises to Alevis has led to resentment, sorrow and frustration.

The final declaration of the Abant Platform also referred to the danger of polarization, as it damages democratization efforts in Turkey.

The declaration further called on the state to provide a constitutional guarantee of religious freedoms and the recognition of differences of individuals and that political actors should respect those freedoms and differences. “Differences are our richness. But, polarization based on these differences deal a blow to efforts for democratization. Trying to understand others will decrease polarization,” noted the statement.

1. The primary obstacle before the achievement and building of peace and a future together by Alevis and Sunnis is the collective psycho-social trauma associated with the bloody past. The traumatic past remains an obstacle to the solution of the problems. Historical research will contribute to the better understanding of the common traumatic past.

2. A language and discourse of extreme exclusion is dominant in religious problems that are observed in our country and in the nearby geography. It is now necessary to avoid a sectarian discourse that pays attention to the sects and sectarian identities. It should be noted that these conflicts hold potential that would aggravate the current problems in our country.

3. It is wrong to take political and ideological discussions and debates to a religious ground. Nobody should attempt to describe the faith of others acting on behalf of them. The state cannot regulate faiths and beliefs; it cannot say anything on how they should be. The religious groups and communities should be recognized as legal entities because of their entitlement to rights as prescribed under 1966 UN conventions and principles of the Venice Commission.

4. The state should introduce legal and practical assurances and guarantees on the basis of constitutional equality for the beliefs, diversities and freedoms of individuals and communities, and political actors should respect this. Rights and equality should be evaluated in reference to the freedom of individuals.

5. Our differences are our richness. However, polarizations along these differences hurt democratization efforts. Trying to understand others and tell of them, and thereby going beyond defending ourselves and our faith identity, alleviates polarization.

6. Workshops held in recent years raised hopes within the Alevi community; however, failure to implement the decisions jointly taken at the workshops led to serious disappointment.

7. Political decision makers should consider the status of the houses of union (cemevi) as a social demand rather than a religious matter, and these demands should be properly responded to by the introduction of a new law on the matter.

8. The course on religious culture and ethics should no longer be a core required course under the Constitution. In regular public education, this course should be redesigned to include lectures and explanations on the Alevi faith and other religions by reliance on an objective and pluralist approach. The religious courses that would include references to Alevis and other religions as well should be elective.

9. In the face of a growing perception that there is discrimination in offering religious services, the following recommendations are agreed upon at the meeting at the Religious Affairs Directorate:

* The directorate should hold an autonomous status and should be funded by an optional “faith” tax. And the other religious groups should be able to establish such autonomous entities.

* The current status of the directorate should be preserved, but it should provide service for other religious groups as well.

* This issue should be left to civil society altogether.

10. The common issues of Alevis and Sunnis could be resolved by focusing on the terms of justice and equality. The previously seized and confiscated places of worship and institutions of Alevis and other religious groups should be returned to the original owners.

11. The issues of discrimination the Alevis are experiencing in the public sphere and in public services should be resolved so that they feel safe.

The news that Turkey will officially request that the United States extradite Turkish Islamic scholar Fetullah Gulen is threatening to strain U.S.-Turkish relations. Ankara insists Gulen is behind a conspiracy to overthrow the government. But analysts warn that Ankara may find it difficult legally to secure his extradition.