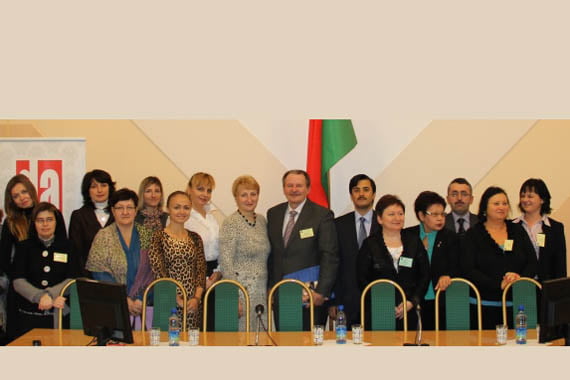 The “Evolution of Teacher Training: International Cooperation and Integration” conference, the fourth in the traditional conferences series, jointly organized by Belarusian State Pedagogical University and the Dialogue Eurasia Association, was held in Minsk, the capital of Belarus.

70 academics from Turkey, Lithuania, Russia, Ukraine and Poland attended the event that took place between October 24 and 25. Pyotr Dmitrievich, the rector of the Belarusian State Pedagogical University, demanded that the funds allocated to technology and training in the teacher training should be increased. “If we fail to support the profession of teaching with sufficient facilities, we will hardly find any student to be ready for working in this field. Teachers should not go through financial hardships and they should be able to focus solely on their profession. We must invest in education to have a better future. A country’s development largely rests on the importance it attaches to education,” Dmitrievich said.

Dialogue Eurasia Association President Sezer Çakmak indicated: “Universities can hardly be seen as institutions that solely focus on raising academically successful individuals. Universities and schools must also seek to endow their students with basic human values and ensure that they make these values the guiding principles of their lives. The ability to be educated is a major human quality. Teachers are safeguards of our future. So we must not only equip them with due knowledge, skills and positive behaviors, but also raise them as good, morally-upright and well-educated human beings having balance, healthy and enhanced personalities and characters. Belarusian Dialogue Eurasia Association supports all sorts of investments in education with the belief that teachers are engineers that will build the future. We think such conferences will make positive contributions to pedagogical education in Belarus and Turkey.”