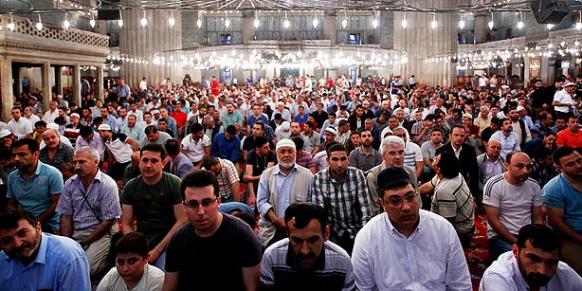 Along with the rest of the Islamic world, Turkey marked the Muslim festival of Lailat al-Miraj, known as Miraç Kandili in Turkish, which is the sacred day of the Prophet Muhammad’s ascent to Heaven, on Sunday, while also praying for the souls of 301 miners who died in a mining accident in the western Turkish province of Manisa.

Millions of people flocked to mosques across the country on Sunday as Soma’s Central Osman Gazi Mosque also hosted Soma residents, family members and relatives of the 301 miners who died in the disaster that hit Turkey two weeks ago.

The Islamic memorial ceremony was organized by the Kimse Yok Mu Foundation at the Soma Central Osman Gazi Mosque. Scores of people came from İstanbul, İzmir, Bursa, Manisa, Uşak, Balıkesir, Denizli and Kütahya to attend the ceremony in Soma.

“Our colleagues from our foundation’s logistics team have been here since the first day of the tragedy. Our volunteers have visited the miners’ families and delivered their condolences. They have identified the urgent needs of those people. We have also tried to be with our brothers through prayer, while also providing for their material needs. But no matter what is done, we understand that the pain our brothers have been through cannot be solved, as we cannot bring back our dead brothers. But our support and help will not be short term. As long as this foundation is alive, the children of our brothers will be provided with scholarships and educational opportunities,” Arıkanlı said.