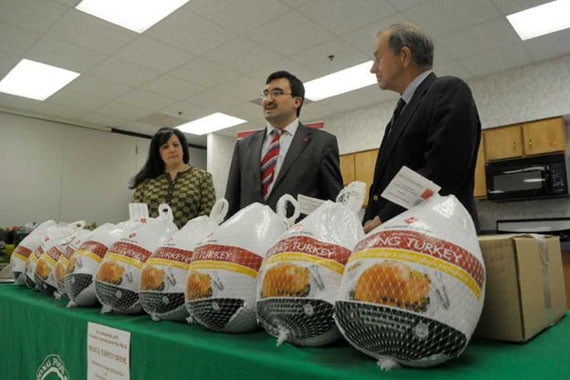 Joanne Dwyer, left, director of food industry relations and business development for the Regional Food Bank of Northeastern New York, Veysel Ucan, center, executive director of the Turkish Cultural Center Albany, and State Assemblyman Bob Reilly take part in a press event at the Regional Food Bank of Northeastern New York, on Tuesday, Nov. 22, 2011 in Albany, NY. Members of the Turkish Cultural Center Albany donated 500 pounds of packaged beef cutlets and turkeys to the food bank in celebration of the Muslim holiday Feast of Sacrifice, Eid ul Adha and for the Thanksgiving holiday. Ucan said that the donation was a way for the Turkish American community to show their shared values for the whole community. Dwyer said that they send items to 1,000 non-profits in 23 counties and through those organizations 250,000 people are helped each year. "This year were heading towards 26 million pounds of food and grocery items being distributed and donations such as this one is just what we need to feed the growing need", Dwyer said. In 2009 it was 22.4 million pounds of items distributed and in 2010 it was 25 million. Dwyer said that the donated meats would allow the food bank to supply some 2,000 meals out of it. Throughout the year the food bank receives donations from food industry partners, groups and organizations and individuals. (Paul Buckowski / Times Union)

Joanne Dwyer, left, director of food industry relations and business development for the Regional Food Bank of Northeastern New York, Veysel Ucan, center, executive director of the Turkish Cultural Center Albany, and State Assemblyman Bob Reilly participate in a news conference on Tuesday at the Regional Food Bank of Northeastern New York in Albany. Members of the Turkish Cultural Center Albany donated 500 pounds of packaged beef cutlets and turkeys to the food bank in observance of Thanksgiving and the Muslim holiday “Eid ul Adha” which means “Feast of Sacrifice.” Ucan said the donation represents the Turkish Americans’ shared community values. Dwyer also noted that items have been sent to 1,000 non-profits which provide help to 250,000 people in 23 counties each year. “This year were heading towards 26 million pounds of food and grocery items being distributed,” Dwyer said.

Dr. Phyllis Bernard: “My speech was as much as anything else a ‘Thank you’ to the Hizmet Movement.. for making an incredible opportunity available for scholars, researchers, practitioners to understand a lot more about what stewardship in business is about. Hopefully as we continue to teach people about how business works in different places around the world, we’ll have a lot more respect and understanding for the kind of Islamic cultural values that one finds everywhere. And our entry way for that were the Hizmet Movement businesspeople; they were astoundingly fine.”