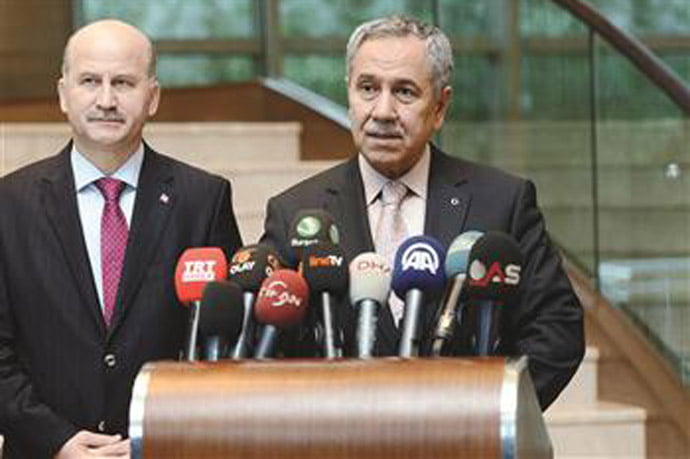 Government officials, however, wasted no time in making statements about the MGK decision and said it has never been enforced.

The decision made during the August 2004 National Security Council meeting includes a two-page section titled, “Measures that should be taken against Fetullah Gülen’s operations,” the daily Taraf reported Nov. 28.

“Legal regulations that introduce harsh sanctions should be adopted and an action plan [against the Gülen Movement] should be prepared,” says the decision, signed by the former President Ahmet Necdet Sezer, Prime Minister Recep Tayyip Erdoğan, former Chief of General Staff Hilmi Özkök and current President Abdullah Gül, who was then foreign minister.

Tension between the government and the Gülen Movement, known in Turkish as “Cemaat” (community) or “Hizmet” (service), escalated recently after Erdoğan announced plans to abolish private examination prep schools (dershane), many of which are financed and run by Gülen’s followers. Erdoğan describes the group’s loud objections to his government’s plans as “a smear campaign.”

Although the Fethullah Gülen Movement is thought to have had close relations with the ruling Justice and Development Party (AKP) until recently, the daily Taraf claimed the MGK document proved that a decision to “finish” the movement had already been made in 2004.

However, Deputy Prime Minister Bülent Arınç told reporters in the northwestern province of Bursa Nov. 28 he was not present in the meeting at the time, but added, “even if such a decision was made, it was only advisory.” He also stressed the government definitely did not follow through with the recommendations.

“In 11 years, none of the issues assumed to have been agreed in the MGK document happened and we didn’t do anything to hurt these people either,” Arınç said.

“The 2004 MGK decision was declared void by the government and no Cabinet meeting decision or action was taken,” he tweeted Nov. 28.

AKP Gaziantep deputy Şamil Tayyar also refuted claims that the government was plotting against the Gülen Movement, accusing some people of “causing trouble.”

“It is correct; the decision to finish Cemaat was made in 2004. Then the police department was appointed to the Cemaat, the number of dershanes and schools increased, and the shutdown case was issued against the AKP,” he tweeted sarcastically.

“When the supporters of the sedition are seen, it is understood the problem is not limited to those who attempt sedition,” Tayyar also said, in a way to criticize the attempt to create a rift between the government and Gülen community as well as the Gülen community for supporting such attempts.
Prime Ministry assigned as coordinator

The MGK’s advisory decision to pressure the government to form an action plan to fight against the Gülen Movement also allocated duties for a number of public institutions.

The Prime Ministry Monitoring and Coordination Board (BUTKK) was appointed as the coordinator, while the Internal Affairs Ministry, the Foreign Ministry and the National Intelligence Organization (MİT) were asked to closely follow the movement’s operations inside and outside the country.

In addition, the Finance Ministry’s Financial Crime Investigation Board (MASAK) was also tasked with monitoring businesspeople granting money to Cemaat-related institutions and irregular money transactions, according to the decision.

The MGK decision also underlines the strong Cemaat presence in the student housing sector and calls on the Internal Affairs Ministry to closely watch “the group’s efforts to gain sympathizers and supporters.”

Some had claimed the prime minister’s recent criticisms of mixed-sex student houses were in fact targeting the Gülen Movement, which is known to provide dormitory-style private accommodation for young people.