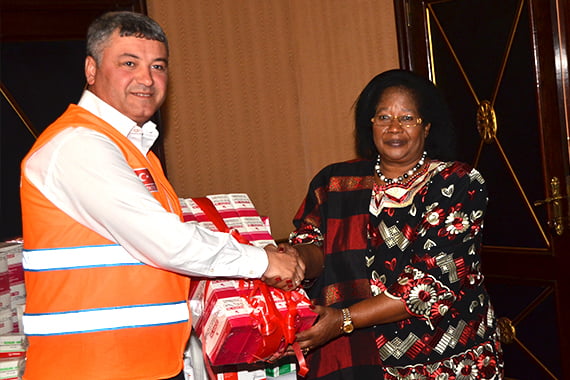 On June 16, Kimse Yok Mu (KYM) volunteers, geared up to assist Malawians, delivered 40 thousand dollars worth of humanitarian aid to the orphans and guardian parents across the country. In addition, KYM distributed sacrifice meat equivalent of 301 shares slaughtered with the contributions of philanthropists.

KYM which offers a helping hand to countries worldwide regardless of faith, language or race, didn’t remain indifferent to Malawians’ needs as well. Having set out on June 16, KYM team delivered aid packages to those in need for a week.

The team tasked to reach out to seven different orphanages across the country delivered aid packages of food, clothing and stationary to 500 orphans in total. Moreover, 600 guardian parents taking care of orphans at their homes were able to meet their daily needs, thanks to the donations. As a part of the aid campaign, a total of 301 sacrifice meat shares donated throughout the year were distributed to the needy. The Malawians, delighted with the donations, expressed their feelings by keeping beat and dancing along. The former Malawian president who was highly pleased by the donations and demanded for future deliveries too, put on a KYM volunteer t-shirt and hat to pose for a picture.

The president Joyce Banda who received the KYM team at the presidential office with a warm welcome, expressed her gladness over such meaningful activities both in person and with a thank you letter addressed to KYM.