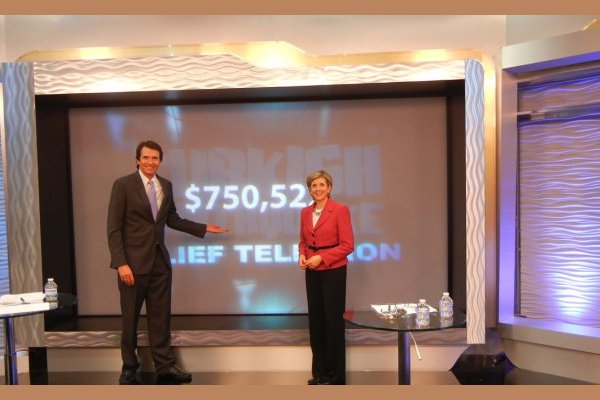 The US-based Ebru TV has hosted a live telethon to collect donations to help relief and rebuilding efforts after a deadly earthquake that hit eastern Turkish province of Van last month.

The telethon, aired on Thursday, created an outpouring of support from a big-hearted American public who helped raise almost $800,000 in pledges for the victims of the devastating earthquake.

Donations have been collected on behalf of Helping Hands Relief Foundation during the telethon hosted by EBRU TV, based in South Jersey.

The Telethon, which was hosted by Ebru News anchors Logan Crawford and Diane Bakos, received calls from all over the United Sates.

“It was truly inspiring to see the outpouring of support for Turkey from every corner of America. I was delighted to play a role in the telethon for such a wonderful and worthwhile cause for one of the most special countries on earth. It was clear Turkey and its people have deeply touched the hearts of so many Americans, including me,” said Rita Cosby, an Emmy Award winner journalist when commenting on the telethon.

Mehmet Okumuş, the president of Raindrop Foundation of Texas, said that the telethon was fascinating. “I think the program was very important and very successful in terms of bringing different communities together for the same goal. And what strikes me about the show is that there were calls from different states and from all groups of society — ranging from congregational level to senate level and from 9 year old boy to university student,” he said.

Since the Oct. 23 earthquake, the Raindrop Foundation has received e-mails, phone calls, voice messages from its 17 branches in seven states in Southwest America, expressing their condolences for their Turkish brothers and sisters. In those messages, they asked what they can do to help ease the pains of victims of the earthquake.

“Raindrop foundation launched aid campaigns for the disasters in all over the world regardless of race, ethnicity or religion,” says Okumuş. “Some of the campaigns we launched were for the Haiti earthquake, Pakistan floods, tsunami in Japan and the Africa Help Campaign. Now it is time to be united to help Turkey.”

“We have raised $125,000 and we are pledging another $125,000. On behalf of Raindrop Helping Hands, I would like thank to everybody who made the contribution for this campaign,” he also said.

Mehmet Kılıç, vice president of the Turkish Cultural Center in New York, said he was grateful for the Americans who helped the victims of the earthquake in Turkey:

“Many good friends of Turkey from all over the United States took their time help fundraising to help families of the victims so that they can rebuild their homes, hopes and dreams for the future. We are grateful for our American friends for their efforts,” he said.

Steven Cymbrowitz, a member of the New York State Assembly, Brooklyn made a statement right before the telethon and stated that the Turkish Cultural Center has been reaching out to all New Yorkers to share their culture for many years: “It is times like this that we want to do something helpful, but don’t know what to do. That is why I reached out to the Turkish Cultural Center New York to find out what is needed in this time of crisis. I was told they were collaborating with the Helping Hands Relief Foundation to collect monetary donations,” he said.

Crescent Community Foundation and the Bangladeshi American Youth Association also pledged their support for the victims of the Van earthquake. Members of the Bangladeshi-American Youth Association (BAYA) donated $3,000 to help relief efforts. Four BAYA members were also present during the telethon to offer their aid and promote aid efforts to Turkey.

Ebru TV officials stated that they are very happy for the interest the American people have shown in efforts to help victims of earthquake in Turkey. They also said they were so glad to receive some calls from Armenian Americans as well: “We are very glad for their contribution,” said one official.

Pledged donations will be turned into funds to help relief efforts in Van as soon as possible.