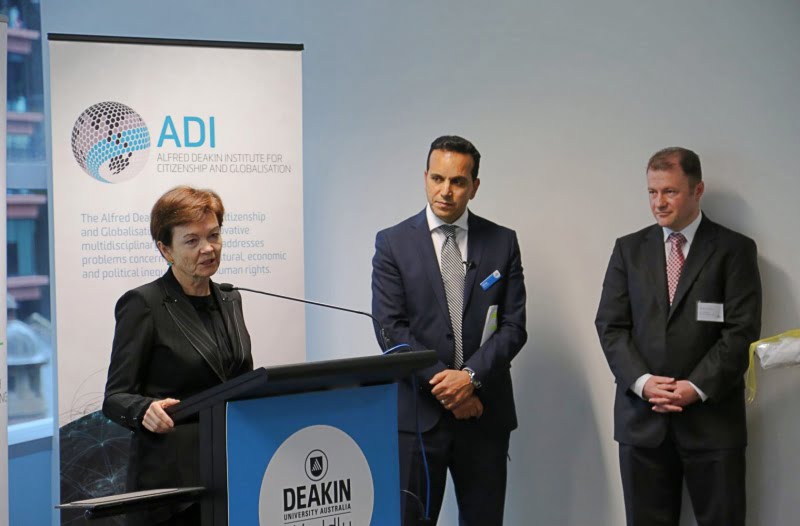 Vice Chancellor of Deakin University Jane den Hollander : "I am honoured to open this chair on Mr Gulen's name"

The Melbourne based Deakin University launched its inaugural Chair, named after Fethullah Gulen, in Islamic Studies and Intercultural Dialogue with a ceremony held on Tuesday 22 November at its Melbourne Corporate Centre (MCC).

Professor Jane Den Hollander, President and Vice-Chancellor of Deakin University officially launched the Chair following a speech by Professor Ihsan Yilmaz who was appointed to the inaugural Chair.

The Chair located within the Alfred Deakin Institute for Citizenship and Globalisation (ADI), reflects the growing strategic partnership between Deakin University, the Australian Intercultural Society (AIS), and the Selimiye Foundation.

ADI Director Professor Fethi Mansouri said the new Chair will have a unique focus. “It will play an important role in affirming the importance of difference in ways that go far beyond tolerance,” Prof Mansouri said.

He further added “the Chair will work towards developing the foundations of true dialogue where people of different traditions and beliefs get the opportunity to know one another and work together towards the ideal of living in peace.”

During his speech, Professor Yilmaz pointed out the three elements that have weighed down the Muslim world in the last two or three centuries; ignorance, poverty and disunity. He stressed that education, knowledge and seeking the truth through academic research is the solution to the problems of the Muslim world.

Mr Ahmet Keskin, Executive Director of the Australian Intercultural Society (AIS) introduced Professor Yilmaz and delivered a brief vote of thanks to everyone who contributed towards the establishment of the Chair.

Mr Celik read a message sent by Mr Fethullah Gulen, after whom the Chair is named. Gulen is a renowned Islamic scholar, writer and the founder of the widely respected Hizmet Movement.

Last December, I was humbled by the announcement by the leadership of Deakin University and Alfred Deakin Institute For Citizenship And Globalisation about the establishment of the Fethullah Gulen chair in Islamic Studies and Intercultural Dialogue.

The establishment of this chair comes at a critical time when ignorance-based fear and failure to engage in self-reflection and criticism are contributing to hostility and violent conflicts around the world. The university’s decision to establish this chair is significant in multiple ways.

First, it recognizes and honors the work of the participants of the Hizmet movement who devoted themselves to serving fellow humans without expecting anything in return. Teachers serving girls in Afghanistan and Nigeria; doctors, nurses and humanitarian relief workers serving those in need in Sub-Saharan Africa, and those seeking dialogue among members of the world’s diverse faiths, ethnicities and cultures. The establishment of this chair recognizes the work of these devotees of love who come from different nations, religions, and ethnic backgrounds.

Secondly, it is a statement of commitment by Deakin University to freedom of thought and expression. I was informed that the University faced pressures to back away from the establishment of this chair by third parties out of political concerns. By going forward with their decision, the leadership of Deakin University reminded their counterparts that universities are places of research and learning and every subject can be studied within the guidelines of scientific inquiry and that trying to suppress freedom of thought and expression is both unethical and futile.

Finally, the establishment of this chair comes at a critical time in our history as hunity. Much fear, anger and violent conflicts driven in part by ignorance occupy the news day in and day out. The progress achieved by humanity in science and technology within the last few centuries is awe-inspiring. But some of our attitudes and practices toward our fellow humans resemble those of thousands of years ago. While knowledge alone cannot solve humanity’s problems, knowledge is a key instrument in the fight against bigotry. By establishing this chair in the study of Islamic Studies and Intercultural Dialogue, Deakin University has expressed its commitment to nurture open and inclusive minds through knowledge.

Due to my poor health I am not able to join you for this meaningful inauguration ceremony. But for spirits united around shared values and ideals, physical proximity is never a requirement for a conversation. I thank the leaders of the Deakin University and Alfred Deakin Institute For Citizenship And Globalisation for their contribution to the advancement of knowledge in the service of humanity.

Fethullah Gulen celebrated eid al fitr with the Turkish American community members. He listened to the sermon after the Eid Prayer with tears in his eyes. After the sermon, he exchanged eid greetings with his guests. Osman Şimşek said in the sermon, “Although we are full of joy for our holiday and are thankful to God-All Merciful, we also feel grief and sorrow because of the horrid situation, which parts of the Islamic world are currently in.”

No society can truly move forward if women, who make half of its population, are limited in their freedoms, rights, and opportunities. The way women are treated and the rights given to them are signs of where that society stands in terms of universal human values.