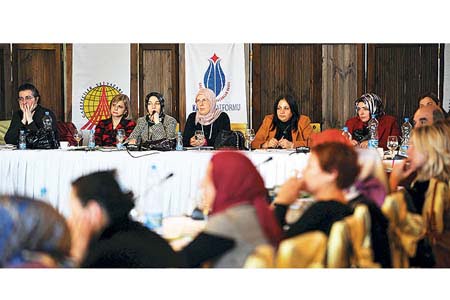 Journalists attended a major event the GYV held on the depiction of women in the Turkish media. (Photo: Today's Zaman)

Journalists who have taken the opportunity to reflect on the thorny issue of freedom of the press in Turkey on the occasion of World Press Freedom Day (WPFD), which is marked every May 3, have drawn a bleak picture, speaking about the various problems that restrict freedom of the press in the country and voicing their recommendations to improve media freedom in Turkey.

World Press Freedom Day celebrates its 20th anniversary this year. It was first officially proclaimed during the United Nations General Assembly in 1993.

According to veteran journalist Yavuz Baydar, the picture concerning freedom of the press in Turkey is not a bright one as he cites several problems faced by the Turkish press that remain obstacles before a free press.

Recalling the slogan set by the UN for this year’s WPFD, which is “Safe to Speak — securing freedom of expression in all media,” Baydar said journalists in Turkey celebrate World Press Freedom Day in a bitter, gloomy and uneasy mood.

“Why? There are several points to be made. First, the ongoing struggle for full-fledged democracy here is happening on the basis of a lively ‘Turkish glasnost.’ Yet, our media, which has been stripped of freedom and independence, remains insufficient to act as a forum that allows a civilized debate. This has to do with Turkey’s deep-rooted culture of intolerance for dissent. The government and Parliament unfortunately do not do anything to fight it. On the contrary, through a tough rhetoric and political stand, it feeds contempt for a diversity of opinions,” he said.

The second thing highlighted by Baydar is the fact that the Turkish media and Internet suffer from restrictions in various laws.

“Punitive measures affect dissidents — mainly Kurdish — in such a way that imprisonment still is a norm,” he complained, recommending that 40 restrictive articles in six laws must be either revised liberally, or lifted.

Some articles of the Press Law, the Counterterrorism Law (TMK) and the Turkish Penal Code (TCK) are frequently used to prosecute journalists in Turkey.

A report published by the Committee to Protect Journalists (CPJ) earlier this year revealed that there are 49 jailed journalists in Turkey. The government says the jailed journalists were not placed behind bars due to journalistic activities but because of their links to illegal organizations.

The third problem with regards to freedom of the press in Turkey, as cited by Baydar, is the relationship between media bosses and journalists.

“Turkish journalism in corporate media is more or less enslaved by its proprietors, who in blind greed have established unholy alliances with the political powers in Ankara. Their economic interests have created a ‘remote control’ system of censoring the news and opinion — and a ‘central media’ in the service of whoever is in power. Widespread self-censorship has turned the newsrooms into open-air prisons. Independent coverage of corruption, abuse of power, etc., has been minimized, if anything. Media moguls have successfully chased out all trade union activity from their outlets, inflicting huge damage to editorial integrity,” he explained.

The problems that were highlighted by Baydar were also mentioned in a statement released by the Journalists and Writers Foundation (GYV), last month, which called on the Turkish government to speed up pro-freedom reforms and to bring its laws in line with European Union standards in order to do away with problems caused by limits on freedom of expression and freedom of the press.

The statement read: “The fact that Turkey’s democratization efforts are overshadowed by developments that are incompatible with freedom of the press damages Turkey’s image in the international arena.

“Removing limits on freedom of the press and freedom of expression and problems caused by these limits in Turkey depends on speeding up pro-freedom reforms and bringing Turkey’s legislation in line with European Union norms. In this regard, in particular the Press Law, the Counterterrorism Law and the Turkish Penal Code should be made compatible with international laws and the European Convention on Human Rights [ECHR],” the GYV said.

Stating that freedom of the press and freedom of expression are indispensable rights in democratic societies, the statement recalled that these principles are also among the fundamental aspects of the Universal Declaration of Human Rights and the ECHR, to which Turkey is a party. “It is a requirement in a democracy that expressing marginal thoughts should also be possible within international norms unless they contain violence, hatred or insults,” the statement said.

According to Deniz Ergürel, a journalist, although Turkey has seen important improvements in the area of press freedom over the past years, there are still many steps to be taken in terms of legislation.