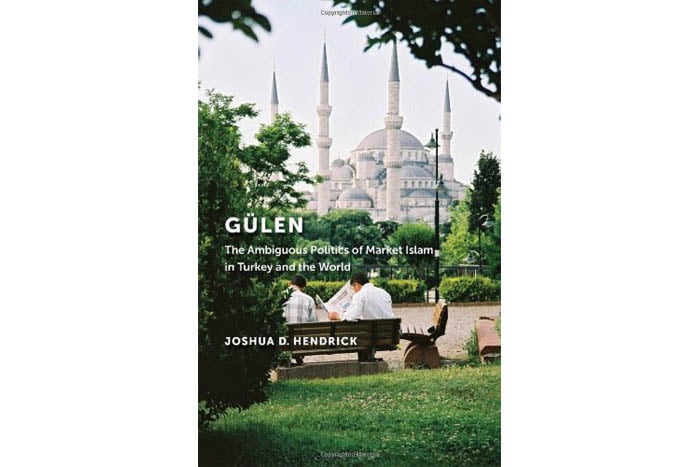 In “Gülen: The Ambiguous Politics of Market Islam in Turkey and the World” Joshua D. Hendrick, writing as a religious economist, seeks to contextualize the rise of Hizmet (the movement affiliated with Muslim scholar Fethullah Gülen) within the historical economic market expansions and contractions of Turkey. The religious and economic theoretical context of his work claims to diverge from typical approaches that understand the rise of Hizmet as a reaction to neoliberal globalization. Instead, Hendrick sees Hizmet as a successful supplier of a premier and alternate Turkish Muslim identity.

While Hizmet self-identifies as a nonpolitical transnational civil society, Hendrick feels it is appropriate to place it within the Turkish political discourse. Hizmet followers narrowly apply the term political “to connote either political party mobilization or state-directed protest/confrontation,” thus reinforcing the movement’s nonpolitical identity, claims the author (18). It is precisely this nonpolitical policy that Hendrick describes as a political strategy employed to rouse Turkey’s transformation. While Hendrick’s overall understanding of Hizmet’s organizational arrangement disregards the value of identity and religious altruism as participant motivators, he does detail the ways in which the movement’s activities yield forms of capital. However, his contribution is buttressed against his assertion that Hizmet is not a social movement working for the greater good, but a collective that engages in social action with the aim of passively increasing the “Muslim share” of social power in Turkey.

According to the author’s definition of the political, Hizmet’s actions are not altruistic, they are in line with global capitalism, politically supporting state policies that expand Turkey’s export economy. Thus, Hizmet’s rational support of economic expansion developed into an unspoken alliance with the ruling Justice and Development Party (AK Party). Hendrick chronicles what he terms a Hizmet-AK Party “passive revolution of piety” — however, his book (published last year) does not reflect the recent animosity between the two.

Indeed, much of the book is dedicated to tightening loose connections between Hizmet and the AK Party, specifically through Hizmet-affiliated media groups Hendrick contends operate as a propaganda machine that upholds the AK Party as the embodiment of secular modernity, reframing Islamic issues as individual human rights issues, a tactic employed to bring global scrutiny to local political quarrels (193). Turkey is not entrenched in a battle between Islam and modernity, according to Hendrick, but simply a battle over shares of social power, “an intra-elite struggle for the hearts and minds of the Turkish nation” (233). The aforementioned passive revolution of piety, according to Hendrick, espouses bourgeois Islamic ethics that preach hard work and privatization as integral parts of religion (25).

Hendrick’s tidy packaging of Hizmet and the AK Party misses the fractures within what he presents as a happy marriage. The initial alliance between Hizmet and AK Party might have been blissful, but this is certainly no longer the case.

Hendrick situates the rise of Hizmet within a historical series of expansions and contractions of freedoms meted out by the state, such as the revised 1982 constitution that tightened the government’s grip on volunteer organizations, and expanded liberties of news media, freeing it from state censorship (48). This explains Hizmet’s use of media for its social mobility projects.

The author chronicles Hizmet’s rise in the private education sector during the 1980s: “Structural shifts in the education system, an increasingly competitive centralized examination requirement, and a newly open market for private sector interests collectively facilitated the GM’s [Gülen Movement, Hizmet] shift from a relatively small community of students to one of Turkey’s most influential players in youth education” (128). In Hendrick’s view, the education sector is where the hearts and minds of Turkey’s youth are won. By offering special supplemental education, for a profit, and therefore superior preparedness for government examinations, Hizmet gained access to a primary recruiting pool.

Hendrick’s economically positioned history sets the stage for his main revelation: Hizmet’s purposeful employment of strategic ambiguity, a tactic used “to achieve a variety of goals that may complement or contradict one another” (56). The benefits of strategic ambiguity include the following: promotion of a unified diversity, ease of organizational change, autonomy of individual Hizmet followers, organizational flexibility in the face of maladaptive policies that inhibit expansion over time, plausible deniability of institutional connectivity, including financial overlaps and politically motivated self-promotion, and the preservation of positions of privilege, specifically that of Gülen (58).

For Hendrick, strategic ambiguity allows Hizmet members to claim “Gülen is at once the reason, motivator, and instigator” behind Hizmet’s transnational efforts “and that he leads no one and manages nothing” (72). The author highlights a controversy amongst Gülen’s followers about his birthday; some believe he was born in 1938, others 1941. Hizmet members explain away this discrepancy by citing regional traditions in eastern parts of Turkey that register births later than normal. Hendrick uses this trivial example to demonstrate how Hizmet engages alternation: the practice of reimagining the past for present purposes.

Hendrick views Gülen as an intellectual who escapes the need to prove his authority through rationally verifiable acts as his followers frame him as a charismatic leader whose authority is proved through miracles; Gülen’s miracle is Hizmet’s expansion and a sign of Gülen’s grace (80). Hizmet is thus socially organized as a charismatic aristocracy: a cohort that assumes a promotional role in legitimating their leader (81). With this in mind, the author deconstructs the composition of Hizmet into three strata: the cemaat (community), arkadaşlar (friends) and yandaşlar, which is deciphered as “sympathizers,” but is more appropriately translated as “supporters” (89).

Hendrick successfully debunks the widely applied communitarian model for understanding affiliation, which sees participation as a contribution to the collective with no gains for the individual. He demonstrates the considerable individual gains for Hizmet participants, specifically the opportunities for education and employment in Turkey and abroad. These individuals comprise Hizmet networks that continue to grow due to friendship marketing, the practice of depending on social networks for commerce and expansion (160). Based on Hendrick’s capitalist framing of Hizmet structures, motivations, and its emergence, Hizmet is not a selfless faith community, it is a for-profit network of products and services.

By focusing on strategic ambiguity, alternation and Gülen’s charisma, Hendrick attempts to chip away at the altruistic exterior with which Hizmet collectively identifies, and which Hendrick views as a superficial, non-mitigating factor in Hizmet’s growth (87). Instead of offering the scholastically arduous biography of Gülen that Hendrick states is a major gap in the literature, he sketches a dichotomous framework with irrational altruism on one side and rational capital gains on the other. He continuously dwells on the economically measurable gains of affiliates while only casually mentioning that participants also gain identity. Subsequently, Hendrick contradicts his earlier assertions that identity is a valuable commodity, reducing Hizmet participant motivations to solely capital benefits.

Hendrick again looks through this reductionist lens when he emphasizes the financial gains of Hizmet in the private education market. He confirms that Hizmet teachers work longer hours than other private educators, and take extra steps to engage the home lives of students, without direct financial increases, ensuring the quality of Hizmet schools (140). However, these facts do not outweigh Hizmet’s financial profits; for Hendrick there is no such thing as a passionate teacher, just a monolithic social movement preying on opportunistic self-interest in an effort to increase the “Muslim share” of economic power. Such contentions in fact refute his earlier statements that his framework is an alternate lens for understanding Hizmet growth outside of traditional paradigms about the rise of social movements as reactions to neoliberal globalization.

His ethnographic data reveals that Hizmet is pursuing cultural globalization, “the globalization that makes us all neighbors,” who need to get along regardless of differences (163). Hendrick interprets Hizmet’s outreach to other countries as a form of “da’wa, an invitation to Islam, proselytization” — despite the absence of phrasing to warrant this reading in the data presented (164). Hendricks also dismisses excludes the current scholarship produced by such acclaimed authors as M. Hakan Yavuz, John L. Esposito, Helen Rose Ebaugh, and Sophia Pandya (70).

Hendrick’s main contribution to the current scholarly discourse is his specification of the ways in which Hizmet’s activities harvest forms of capital. He concludes that Hizmet is an adapting organization of autonomous actors and institutions, ruled by market rationalism that employs ambiguity as a strategy of protection.

The neat packaging of his thesis excludes the elemental humanness of Hizmet, packing a very complex multi-dimensional movement into an inflexible box. He falls short of his goal to offer a more nuanced understanding of Hizmet, instead presenting a reductionist interpretation, dismissing the role that religiosity can play in individual and collective identity formation, leaving his account of a multifaceted movement incomplete.