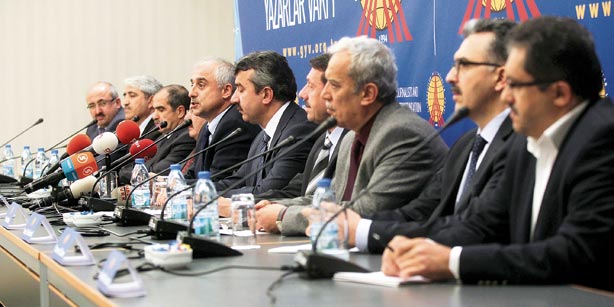 ISTANBUL
Islamic theologians coming together in a workshop organized by the Journalists and Writers Foundation (GYV) have condemned recent allegations directed at the faith-based Hizmet movement by top government officials, stating that it is unislamic to engage in lies, slander and defamation.

A workshop titled “Siyasetin Dilindeki Din” (Religion in political language) was held at Swissotel The Bosphorus hotel in İstanbul’s Beşiktaş district to discuss from a religious perspective the attacks which have been directed at the Hizmet movement by top government officials, ever since a major corruption investigation became public on Dec. 17 of last year. On Thursday, the final declaration of the workshop was released. The declaration was read by Associate Professor Ayhan Tekineş from Sakarya University’s Theology Faculty. Tekineş said that the Islamic theologians at the workshop condemn those who resort to lies, slander and defamation in a systematic and persistent way, despite such behaviors being strictly forbidden in Islam. Tekineş also asserted that this type of behavior may cause irreversible damage between Muslims living together peacefully in the country.

The theologians strongly criticized government officials, who have referred to Fethullah Gülen, a highly regarded and prominent scholar who is honorary chairman of the GYV, using expressions such as “false prophet,” “fake saint,” “hashashin [a medieval assassin],” “traitor” and “terrorist,” stating that directing such defamatory words to a respected Islamic figure never is not compatible with religion and morality. The theologians also said that the defamation campaign against Gülen is a contemptuous gesture to all Islamic scholars in Turkey.

In the declaration, the theologians drew attention to the fact that a Justice and development Party (AK Party) deputy called Prime Minister Recep Tayyip Erdoğan a “person who has all the characteristics of God,” stating that describing a human being in this way is not acceptable in Islam. The theologians added that remarks that “he [Erdoğan] is like a second prophet for us [AK Party members]” and “the eternal leader” used by some AK Party members are also unacceptable.

Mentioning the remarks of AK Party İstanbul deputy Metin Külünk, who defended corruption in the government by stating that the investigation is “a blow to an individual’s right to commit sins,” the theologians said that Külük’s comments were “beneath contempt.”

Stating that the followers of the Hizmet movement have been exposed to a variety of insults and slander by the government over the past three months and that government officials had accused followers of being false Muslims, the theologians recalled one of Prophet Muhammad’s “hadiths,” that says that anyone who accuses a believer of being an unbeliever will inevitably suffers the consequences, if the allegation turns out to be untrue.

A large-scale and underhand propaganda campaign is alleged to have been conducted against the Hizmet movement and Gülen by some circles close to the AK Party government, particularly after the corruption scandal which implicated three Cabinet ministers’ sons, many state bureaucrats and well-known businessmen. Government officials have accused the Hizmet movement of orchestrating a plot against the government and of using the corruption investigation to damage the government.