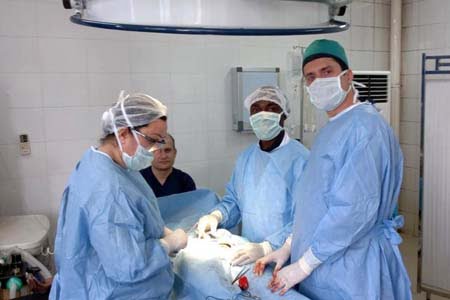 The two members of Association of the Kadirli Medical Professionals (a district of the province Osmaniye in Turkey), general surgeon Cem Oruc and anesthesiologist Ali Ihsan Atac are back from the Central African Republic.

The medical team, welcomed on their arrival by the deputy-minister of health, performed 40 operations and some one thousand examinations in five days in the capital Bangui, where they had been encouraged to go by Kimse Yok Mu in order to provide humanitarian aid and thus ease the pains. Noting that they were received by the president as well, the surgeon Oruc said, “There are a great number of people in need of medical care in the Central African Republic. The medical equipment and professional resources are quite limited. A coup d’état recently took place in the country leaving the people in destitute. Here we examined even the minister of health. We have come back home leaving behind thousands of hands in need of help. I will go back again if I have the chance.”

Source: [in Turkish] Bugun, 12 May 2013. English translation is retrieved from HizmetMovement.Com

Pedro Bayeme Bayeme Ayingano Guine,  from Equatorial Guinea, says,  “A Turkish construction company built the largest convention center in our country and there is a Turkish school which provides quality education. … TUSKON also is a bridge between us and Turkey… We are keen to engaging in partnerships with Turkish firms.” 16 December 2011 / […]