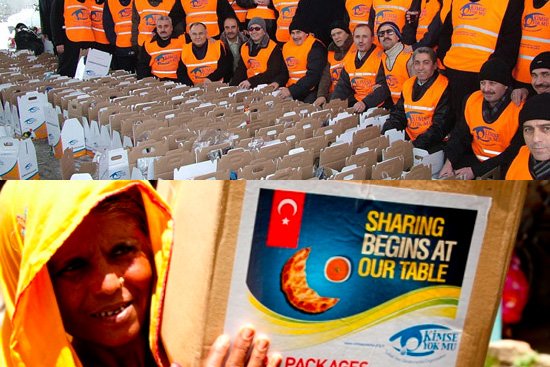 With the arrival of the holy month of Ramadan, relief organizations have rolled up their sleeves to help those in need.

The fasting month of Ramadan, deemed by Muslims in Turkey the sultan of all the months, is considered the most venerated, blessed and spiritually beneficial month of the Islamic year. During this month, prayers, fasting, charity and self-accountability are especially emphasized, and all obligatory religious observances are further encouraged, as this month was called by the Prophet “the month of my people [Ummah].”

For these reasons, Kimse Yok Mu, Deniz Feneri and other charities will offer iftar meals and distribute food packages during Ramadan in all of Turkey’s provinces and provide help to those in need in 103 other countries around the world, according to the Cihan news agency.

The foundation has raised its Turkey target for this Ramadan and will distribute 178,300 food packages and set up iftar tents in 22 provinces in a bid to feed an estimated 636,000 people. The association has reached out to people from 103 countries to distribute donations made by Turks during Ramadan, Eid al-Fitr and Eid al-Adha.

Kimse Yok Mu accelerated its expansion and networking efforts in 2006. After opening offices in major Anatolian cities, the association now has branches in 28 cities, and expects this number to rise in the near future. Celal Türkoğlu, the head of the organization, told Sunday’s Zaman that Kimse Yok Mu will step up its efforts towards a more livable world and its calls on potential donors to help with the charity’s humanitarian mission.

Note: The story has been summarized. Click the link to read the original one.

There are credible grounds to believe that government agents forcibly disappeared the missing men. The Turkish authorities should promptly uphold their obligation to locate the missing men, who may be in grave danger, secure their release and if they are in custody give them immediate access to a lawyer, and let their families know where they are.