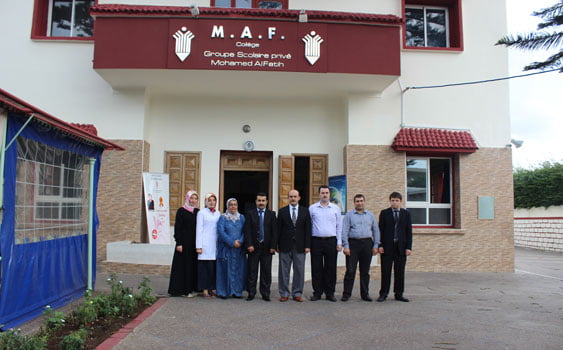 Two additional Turkish schools, one of which will provide education in English in Morocco for the very first time, will be set up in Casablanca, Morocco Turkish Schools General Director İbrahim Aktaş announced on Tuesday.

The first Turkish school on the African continent was opened in Morocco in the city of Tangiers in 1994. Other schools were subsequently opened in 52 African countries.

Turkish schools are currently providing educational services in 140 countries around the world.

Muhammad Al Fatih Educational Institutions, which journalists were able to visit under the scope of a cultural trip organized by Anafen Schools, is one such successful Turkish school. The institution, which has schools in five cities across Morocco, will increase their educational reach with the opening of the two new schools.

Today, Muhammad Al Fatih Educational Institutions have two primary schools, five middle schools, three high schools and a language school in five cities across Morocco. Stating that approximately 5,000 students have been educated in their schools, Aktaş said: “Our schools are based on education and guidance. The notion of sharing is also taught in those institutions. One of our new schools is going to be the first school to provide licensed education in English in Morocco.” There are currently 300 Moroccan and 40 Turkish teachers in Turkish schools in Morocco.

Turkish Ambassador to Morocco Uğur Arıner told journalists that there are many similarities between Turkish and Moroccan cultures. In addition, due to the interest of Moroccan people in Turkish culture, Turkish Airlines (THY) flights between Turkey and Morocco are usually fully booked. The ambassador also called for more Turkish investment in Morocco.