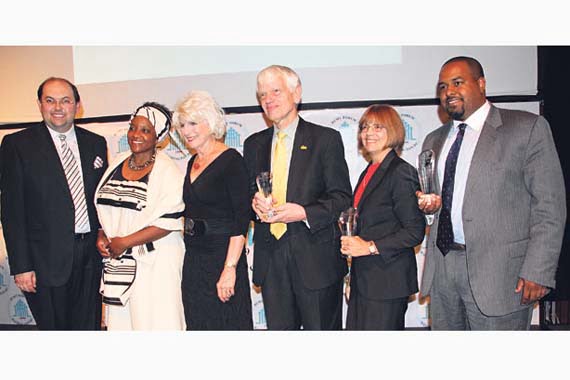 The prestigious Rumi Forum awards were presented to people who contributed in peace and dialogue initiatives in advancing interfaith cooperation in the US.

The Rumi Forum, an international organization promoting interfaith dialogue and peace, presented awards celebrating peace and dialogue initiatives at their annual Peace and Dialogue Awards ceremony in Washington on Tuesday.

Dubois, an advisor to US President Barack Obama, said he was greatly honored to receive the Extraordinary Commitment to Service Award while praising the Rumi Forum for being at the forefront in advancing interfaith cooperation and understanding in the United States and around the globe since 1999.

“We look forward to working with the Rumi Forum to advance intercultural understanding in our government, in our country and around the world motivated by the president’s belief, as he stated in his inaugural address, that our patchwork heritage is a strength, not a weakness. We are a nation of Christians and Muslims, Jews and Hindus and non-believers; we are shaped by every culture and language,” DuBois said.

Tutu’s daughter Naomi accepted the Extraordinary Commitment to Dialogue and Reconciliation Award on behalf of her father, which she said her father accepted as a great honor. In a speech, she said: “It is a great honor, and when I spoke with my father about the award, one of the things that we talked about was some of the poetry of Rumi, and one line in particular, ‘Move outside the tangle of fear thinking,’ which he [Archbishop Tutu] believes has been what has led him in his life to recognize the common humanity of all. When we can move beyond fear thinking and see in one another brothers and sisters who share fears, hopes and dreams, our move for a peaceful and just world will come about.”

The Forum’s Extraordinary Commitment to Peace Through Media Award went to Rehm, who spoke about the politicization of the US Congress in her speech. “I wished every single member of congress were sitting in this room to see that grand film and to hear the comments of Archbishop Tutu’s daughter,” she said.

Chane, the recipient of the Extraordinary Commitment to Peace Award, was unable to join the ceremony as he was abroad, but sent in a video message instead. He said it was a great honor for him to receive this award, and praised the efforts of the Rumi Forum to seek a “common ground” among people.

The recipient of the Extraordinary Commitment to Education Award was Merten, who offered his thanks to the forum for presenting him with the award. Merten said his university has students from more than 140 countries, a fact that he says he feels most proud of.

Rainer Hermann The Turkish preacher Fethullah Gülen has been living in the United States for 13 years now. A widely branched network of followers developed also there in his name. There is no road sign indicating the exit and the dirt track. It leads you through a foggy broadleaf forest colored in all the shades […]