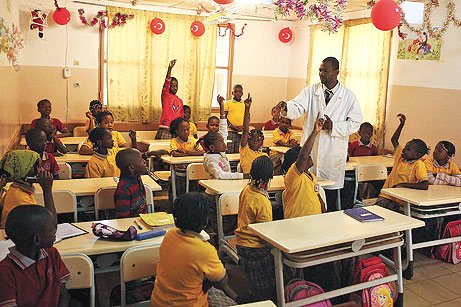 Despite the ongoing conflict their country, Malian students are receiving education in Turkish schools, like this one. (Photo: Today's Zaman, Mehmet Yaman)

Turkish schools in Mali are staying open to students in spite of the military operations against rebels being carried out in the northern part of the African country.

Northern Mali fell under rebel control after a March military coup in Bamako triggered a Tuareg-led rebel offensive that seized the north and split the West African nation in two. France sent around 3,000 troops to Mali, a former French colony, at the request of its government in January.

Attendance at the Turkish schools at Bamako and Segou has been constant despite the conflicts.

Erdal Karadeniz, the education coordinator of the Turkish schools in Mali, has said that although some foreign schools in the country closed after the conflict broke out, they do not plan to follow suit.

“Our Turkish schools in Mali are continuing to hold classes without interruption. There’s no trouble in the capital Bamako at the moment. Turkish and Malian teachers are continuing teaching together. Parents are sending their children to school. Some of them ask us whether we are going to close the school because the American and French schools here have been closed. But we tell them not to worry and that we will continue to support them. A coup was staged here last year. But we still kept providing education except on official holidays,” he said.

He added that some of the students who had been attending the American and French schools that have been closed are now enrolled in Turkish schools to keep up with their education. Nevzat Öter, the principal of Ufuk College in Segou, said his school opened four months ago. “We are a new school, but we gained the locals’ support quickly. And now that we continue providing them education despite the ongoing operations, the locals have been even more supportive of us,” he said.

Children in Turkish schools learn Turkish in addition to other basic courses. In the Turkish language courses, they also learn Turkish songs, poems and Turkish culture.

As well as two more schools planned to be established next year, Turkish cultural centers will be founded by Turkish businessmen to strengthen the ties between Turkey and Mali, Karadeniz said.

More than 150 Malians work in the Turkish schools, Karadeniz said. Although the Malian people are very poor, they are satisfied with what they have, he added.

The West African country has been in political limbo since a coup in March of last year triggered the rebel takeover of the north.

Related article: Civil war in Mali did not discourage the Turkish school teachers