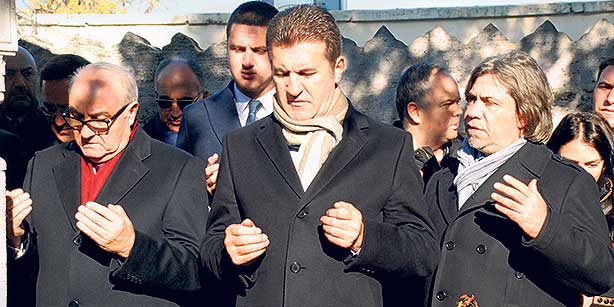 Şişli Mayor Mustafa Sarıgül, on Sunday nominated as the Republican People’s Party’s (CHP) mayoral candidate for the İstanbul Metropolitan Municipality, has made his first election promise, pledging to protect the city’s historic skyline, which has been ruined by skyscrapers and other massive building projects over the last decade.

Following a 7.5-hour-long party council meeting on Sunday at the CHP’s headquarters in Ankara, Sarıgül, who rejoined the CHP on Nov. 3 eight years after he was expelled from the party, was declared the CHP’s mayoral candidate for İstanbul.

On Monday, Sarıgül launched his election campaign by visiting the tomb of Sinan, an Ottoman chief architect who built many masterpieces in İstanbul.

Delivering a speech at the tomb, Sarıgül said he wouldn’t approve any projects that go against İstanbulites’ interests or offend them.

It was Sinan, Sarıgül said, who shaped İstanbul’s skyline with his buildings: “Here, in the presence of the memory of Sinan, I promise that we will not bring any project that is against the culture, arts, science, environment and nature of İstanbul onto the agenda.” Sarıgül said he and his team would follow in Sinan’s footsteps and bring İstanbulites together with beautiful projects.

Regarding the government’s recent ban preventing journalists from entering police stations, he said: “I am very sorry about this move. The freedom to have access to news should never be denied. Blocking this freedom is an unacceptable thing in the 21st century. I am very sorry for having to talk about such a ban today. I hope those who imposed this ban are aware that they made a mistake and give [such actions] up.”

The ban was imposed on Sunday, when journalists accredited with the Turkish police were ordered to hand in their credentials as well as keys to media briefing rooms in some police stations.

The ban followed a scandal over a corruption investigation that has drawn in several ministers. In the probe, dozens of people — including the sons of two ministers — have been arrested.

Sarıgül also thanked CHP leader Kemal Kılıçdaroğlu and the party council for trusting him and nominating him as the party’s mayoral candidate for İstanbul.

Sarıgül, who won municipal elections in İstanbul’s Şişli district in 1999, 2004 and 2009 and challenged former CHP leader Deniz Baykal at a leadership congress in 2005, is thought to be the CHP’s best shot at winning the mayoralty of İstanbul because of his popularity in the city. He was expelled from the party for “creating unrest and causing altercations” in 2005. CHP Deputy Chairmen Gürsel Tekin, Haluk Koç and Akif Hamzaçebi were also potential candidates for the race.