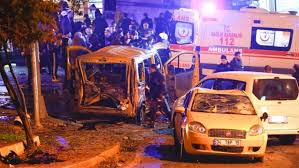 THE first attacker, driving a car packed with up to 400kg (880 lb) of explosives, struck near an Istanbul stadium after pulling up next to a riot-police vehicle. The second detonated his suicide vest less than a minute later, after a group of policemen surrounded him in a neighbouring park. The December 10th bombings, the latest in a wave of terror attacks that began in the summer of 2015 (see chart), killed at least 44 people, including civilians heading downtown on a Saturday night. The first blast was so powerful that firefighters were seen collecting body parts from the stadium’s roof. A group called the Kurdistan Freedom Falcons, widely considered a front for the outlawed Kurdistan Workers’ Party (PKK), claimed responsibility. 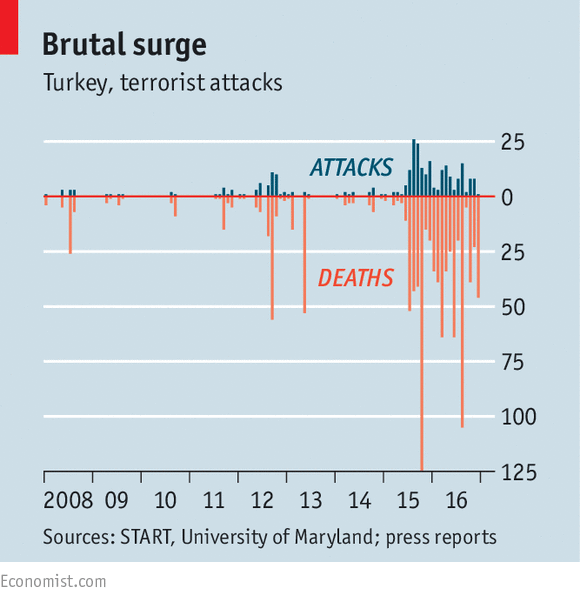 As enraged demonstrators took to the streets, Turkey’s government pledged to destroy the PKK once and for all, something its predecessors have promised but failed to do since 1984, when the group launched an insurgency in the Kurdish southeast. Turkish jets struck PKK bases in northern Iraq. Police have detained over 500 people, some for sharing allegedly pro-PKK content on social media, as well as two parliamentarians from the pro-Kurdish Peoples’ Democratic Party (HDP). Ten other HDP deputies, including Selahattin Demirtas, a former presidential candidate, have been in prison since early November.

Recep Tayyip Erdogan, Turkey’s president, argues that the only way to solve Turkey’s turmoil is to place all executive power in his hands. Hours before the bombing, the prime minister, Binali Yildirim, unveiled a raft of constitutional amendments to do just that. The changes would do away with the office of prime minister, enshrine the presidency as the seat of executive power, and give Mr Erdogan the authority to appoint senior civil servants, declare a state of emergency, and issue decrees. They must clear parliament before being put to a popular referendum next spring.

Officials from the ruling Justice and Development (AK) party argue that the provisions would preclude turf battles between presidents and prime ministers. Critics say it is hard to imagine what such turf battles might be: Mr Erdogan already governs without many checks. The purpose of the constitutional changes, they say, is to formalise one-man rule. They would take effect in 2019 and could let Mr Erdogan rule for two more five-year terms, to 2029.

In theory, the executive presidency should be within Mr Erdogan’s reach. His alliance of Islamists and nationalists has become a magnet for those galvanised by the coup attempt in July. Mr Erdogan has fanned outrage over the failed coup and stoked fears of another to intimidate opponents and justify the arrests of up 40,000 people, including about 100 journalists. Outside observers and the political opposition have recoiled at the scale of the crackdown. But nationalists and conservatives have embraced it, persuaded that Turkey faces an existential threat from plotters beholden to foreign powers. Some blame only the Gulen movement, an Islamic sect believed to have been involved in the coup; others add conspiracy theories involving Germany, America and Britain.

Yet Mr Erdogan is starting to face headwinds. The economy contracted by 1.8% in the third quarter, its worst performance since a recession in 2009. The lira is testing new depths; the government has asked people to defend it by selling dollars and euros. Support for the executive presidency hovers below 50%.

Mr Erdogan likes to cast himself as a cure for the chaos spreading across Turkey. Yet he is also one of its causes. Courting the nationalist vote, Mr Erdogan has ruled out peace talks with the PKK. Responding to PKK attacks against security targets in 2015, he inflamed the conflict by arresting Kurdish politicians, pulverising towns in the southeast, and displacing some 500,000 people. The offensive has dealt the PKK a hefty blow, but it has also pushed droves of desperate young Kurds into its arms.

Earlier this year, a PKK leader boasted that his group sought to topple Mr Erdogan’s government. The threat now sounds hollow. Experience shows that Mr Erdogan’s main enemies often turn out to be his most effective enablers. Turks and Kurds are left mourning their dead.