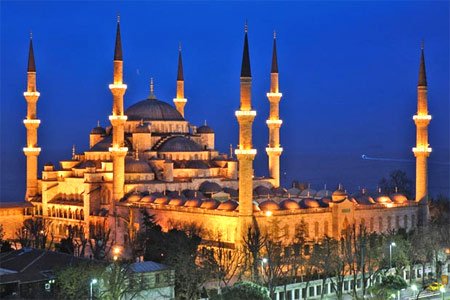 Perhaps curiosity first put the idea in their minds. Or perhaps it was simply the opportunity for exotic travel. But Freddie and Carrie Komar promptly realized that this was no ordinary tour.

“When I started, this was just a trip to Turkey. But now,” Carrie paused and smiled, “it has become a genuine journey for me.”

For 10 days in January, the Komars participated in an interfaith tour, traveling with 10 other Texans, most of them staff and faculty from St. Mary’s University in San Antonio.

The Texas group began their Turkey tour in Istanbul, formerly Constantinople, and the ancient capital of both the Roman and the Byzantine empires. Over the next week and a half, the group visited Ephesus, Izmir, Turkey’s capital city of Ankara, Urfa, and Antalya, sister city to Austin.

Traveling a mere month after Pope Benedict XVI, the Komars not only visited many of the pope’s original destinations but also met with Muslim educators, professionals, families, and religious leaders committed to promoting interfaith dialogue.

It was this one-to-one encounter that deeply moved Carrie Komar.

“When I told my friends what we were doing, coming here, they kept talking to me about the dangers. Before I came, I, too, had fear because of all the differences,” said Carrie, office manager for the Athletic Department at Bryan High School. Speaking of their first trip outside the United States, Carrie said, “Now it is clear to me that it all comes down to family and faith, and the people we met are the same as us, and we are the same as them.”

The interfaith tour was funded and hosted by representatives from the San Antonio Institute of Interfaith Dialog (IID at www.interfaithdialog.org), working in cooperation with St. Mary’s Fund for Judeao Christian Studies.

Inspired by the teachings of Turkish educator and spiritual leader M. Fethullah Gülen, the IID’s mission is to promote peace and dialogue among people of different faiths.

Turkey, officially a secular republic of 63.5 million people — with 200,000 Christians –– has been called “the Holy Land of the Church” because so many of the earliest church communities were founded there. Most of the writings that make up the New Testament originated there or were addressed to its Christian communities, inspired by the preaching of the Apostles, particularly St. Paul and St. John. According to tradition, Mary lived at Ephesus in the home of St. John.

Turkey is also the land of Abraham, a patriarch shared by Christianity, Judaism and Islam, making him a significant link for the three monotheistic religions. But the country’s population is overwhelmingly Muslim: 99 percent, to be precise.

In addition to its ancient archeological history and its New Testament theological importance as a place where St. Paul traveled, Turkey is important “as a possible practical bridge into the Muslim world, especially the former Soviet states with large Muslim populations and Turkic culture and languages,” explained Marianist Father Charles H. Miller, St. Mary’s professor of theology and archeology, and director of Roamin’ Rattlers, the university’s touring program.

During his visit to Istanbul, Pope Benedict emphasized his respect for Muslims and their faith, reiterating that Christians and Muslims can build on their mutual belief in the “sacred character and dignity of the person.” This is, added the pope, “the basis of our mutual respect and esteem… the basis for cooperation in the service of peace between nations and people, the dearest wish of all believers and all people of good will.”

Father Miller agrees. “When we realize that ‘the Other’ is as human as we are, and has many of the same values — family integrity, respect for persons, concern to bring up children in loving and positive environment, value of having children, deep faith in God — then we can start dialoguing about how to better understand each other’s core beliefs, which will not always coincide nice and neatly. Personal acceptance and the building of personal trust comes first,” explained Father Miller, who has been traveling to Turkey since 1975, acknowledging that this interfaith tour was “the first time I really had the opportunity to observe Turkish family life in the home.”

For the Komars, parishioners of St. Joseph in Bryan, their journey with interfaith dialogue began with Sept. 11, 2001.

As a response to Sept. 11, Freddie Komar, assistant chief with the Bryan Police Department, began to work first-hand with the local Muslim community. Through the Texas A&M interfaith group, the Muslim community started preparing dinners for the department as a way of meeting their police officers.

“I got to know the [interfaith] organizer and spent a lot of time talking to him,” Freddie remembered. “He encouraged us from the beginning to set aside our pre-conceived notions and open ourselves to the experience.”

So Freddie went home, invited Carrie to join him, and they attended their first interfaith meeting at the Episcopal church in College Station. “We didn’t know what to expect,” he said, remembering how at first they “just sat back and observed.”

“In my line of work,” after 28 years in law enforcement, Freddie added, “there’s a danger of becoming very skeptical. So many of the people I deal with have ulterior motives and secondary agendas. But when I first met the members of the [interfaith] group, it was refreshing. These folks were genuinely kind.”

When asked how this interfaith tour of Turkey has changed him, Freddie Komar candidly noted one observation. “We have a lot of immigrants in our area [Bryan/College Station], and our department devotes a lot of time and money to teaching our officers Spanish and to learn ing the culture,” he explained. The times in Turkey when the group wandered off without a guide and without a Turkish translator, “have helped to give me an appreciation for what our immigrants go through.”

Imam Emrullah Hatipoglu, who greeted Pope Benedict during his visit to Istanbul’s famed Blue Mosque last month, also welcomed the Texas interfaith tour group to the mosque personally, inviting them across the carpeted prayer hall into his office, where he informally answered questions. “I should thank you for coming here, for traveling so far,” he smiled, bringing his right hand to his heart. “I thank you for your vision and for your role in this important work [of interfaith dialogue].”

For the imam (or prayer leader), nothing in interfaith dialogue compares to a personal encounter. “If you’ve never met a Muslim, you don’t know them as persons. You decide what you believe based on what you hear. But if you see and meet people first hand, you begin to know each other as human,” he said.

During his visit, the pope described authentic dialogue as “based on truth and inspired by a sincere wish to know one another better, respecting differences and recognizing what we have in common.”

Carrie Komar echoed Pope Benedict’s definition. “You have to let go of your pre-conceived ideas, be willing to get to know the real person, and trust yourself to your faith.”