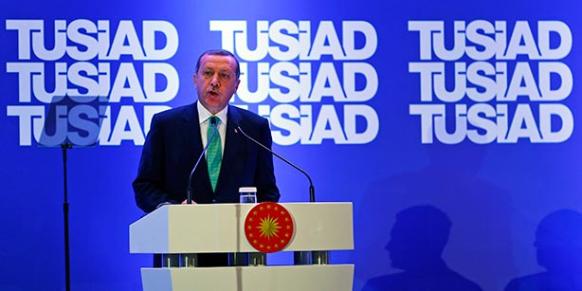 Turkish President Tayyip Erdoğan said “Bank Asya is already finished” during his address at a meeting of the Turkish Industry and Business Association (TÜSİAD) in Istanbul September 18, 2014. (Photo: Reuters)

Certain politicians and pro-government newspapers alike have made frequent and insistent statements aimed at seeing Bank Asya go bankrupt, despite the fact that these remarks are in clear violation of banking law.

On his return trip from a Sept. 15, 2014 visit to Qatar, Erdoğan told journalists: “The Banking Regulation and Supervision Agency [BDDK] needs to do what is necessary where Bank Asya is concerned. Otherwise, it will be the BDDK itself which will be held responsible.”

Three days later, at the Turkish Industrialists and Businessmen’s Association (TÜSİAD) High Consultation Council meeting, Erdoğan said: “No one is trying to see a bank go under. We are talking about a bank that is already finished. But people are trying to use the bucket brigade to keep it standing. Now, should we really try to keep a financial institution that has gone under like this going?”

Just before leaving for the Turkish Republic of Northern Cyprus on Sept. 16, 2014, Prime Minister Ahmet Davutoğlu said at Ankara Esenboğa Airport: “If any bank, including Bank Asya, is, according to objective criteria, at a point anathema to the normal workings of the system, making such an evaluation is the duty of the BDDK and other institutions. The rules on this are clear.”

The same day, Deputy Prime Minister Ali Babacan said: “The BDDK makes independent decisions where banks are concerned. There may be some unsubstantiated rumors that arise about certain banks. But these are deliberate. When it is necessary, the BDDK steps in and makes decisions without blinking.”

Interestingly, a heated polemic on the topic of Bank Asya unfolded between Babacan and one of Erdoğan’s top advisers, Yiğit Bulut. Appearing on Kanal 24 on Aug. 6, 2014, Babacan had made remarks about ongoing talks regarding the possibility of Ziraat Bankası purchasing Bank Asya. He said: “There are no results yet from these talks, but if some results emerge, we would be gaining something we desire. If Ziraat Bankası were to buy Bank Asya, it would mean the latter would turn into a public participatory bank.”

These statements were sharply criticized by the pro-government media at the time. In fact, in a news article in A Haber carried the headline “Ali Babacan does failing Bank Asya a favor,” and reported: “Ali Babacan has stopped shares in Bank Asya — which has sold off its own material subsidiaries and seen its dreams of partnership with Qatar disappear — from evaporating on the stock market. The government minister, saying ‘Ziraat will purchase Bank Asya,’ wound up bringing in some TL 100 million to the Gülen group’s bank in just three hours. Many attribute this rescue operation of the Gülen bank to Babacan’s personal worries about his political future, based on the fact that he won’t be able to be a candidate in 2015, because of the three term rule.”

On the same day, Bulut made live statements on A Haber TV denying Babacan’s claims, saying: “There are no actions, attempts or even investigations into the possibility of Ziraat Bankası purchasing Bank Asya, as far as the prime minister knows. There was much speculation that occurred in the wake of the statements from Minister Babacan. And in fact, Bank Asya’s value rose some 10 percent, or in other words, TL 100 million. I am calling on the SPK [Capital Markets Board] to take this matter up. Who bought these Bank Asya shares?”

Babacan also came up against Interior Minister Efkan Ala on the Bank Asya front. The moment Ala became interior minister, he appeared live on TRT on Dec. 25, 2013 to allege that prior to the Dec. 17 operations, Bank Asya had bought some $2 billion in cash from the central bank. Ala said: “The cost of this last operation was $104 billion. I am not just saying this as a suspicion. If I ask who it is exactly that bought all those dollars before the operation, I am not just asking out of suspicion. We have documents in hand. What sort of treason is this?”

International news agency Reuters deciphered the trap set for Bank Asya, sharing with the world on Oct. 7, 2014 the intent of the ruling party to take over Bank Asya. A Reuters article with the headline “Faithful customers lend a helping hand to Bank Asya in the midst of a political war” noted that Erdoğan had allegedly even said, “I want to see the keys to Bank Asya on my desk.”

The Reuters article further noted: “Erdoğan was heading out on an official trip. He said ‘When I return, I want to see the keys to Bank Asya on my desk.’ But when he returned, and learned that the bankrupting of Bank Asya had been prevented, he was very angry with [Turkish Central Bank Governor] Erdem Başçı.”