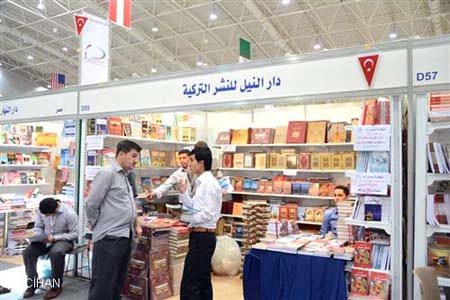 Fethullah Gulen’s books received a high attention of book enthusiasts at International Book Fair in Saudi Arabian capital city, Riyadh. Rated as one of the largest cultural events of the country, the book fair featured 957 thousand publishers from over 30 countries. This year’s guest of honor country was Morocco.

Kaynak Publishing represented Turkey as the only Turkish publishing company. Gulen’s Arabic-translated books by Kaynak Publishing received an overwhelming attention of booklovers. Similarly, the books by Beduizzaman Said Nursi and Abd-al Qadir Gilani too were popular on the publishing booths. Additionally, books on Ottoman Empire history, children literature, Turkish cuisine, Turkey’s history and touristic sites found their places on the booths. Turkish author Elif Shafak’s book “Forty Rules of Love”, recently translated into Arabic for the first time, was among the wide book selection. The number of attendees of the book fair on its 10th day is estimated to be approximately one million.