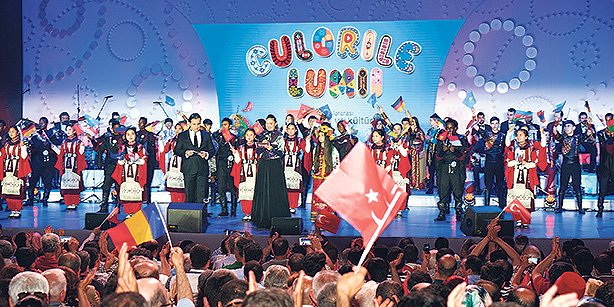 The 13th International Festival of Language and Culture took place on Sunday night in front of a large audience in the city of Bucharest. (Photo: Osman Yılmaz)TĞR

Students from 15 countries fascinated thousands of spectators with their performances in the final of the song competition, held at Sala Palatului, the largest cultural congress hall in Bucharest, on Sunday night. About 4,000 people attended the final competition. The festival brings together hundreds of students from around the world each year. Previously known as the International Turkish Language Olympiad, the name was changed to the International Language and Culture Festival in 2014.

Linogao delighted members of the jury — which comprised Atilla Olgaç, a Turkish actor at the İstanbul State Theater (İDT), several celebrities from Romania and singers from Belgium and France — to win the song contest, while Oluwakemi Oyedokun from the US state of Texas came second. Anissa Lukaraj from Albania was placed third. Olgaç announced the winners of the contest, while the awards for Oyedokun and Lukaraj were presented by Romanian Culture Ministry Undersecretary Alexandru Oprean. Linogao’s prize was presented by Husamettin El Aziz from the Embassy of the Philippines in Romania.

Speaking about her victory afterwards, Linogao said she dedicated her gold medal to Turkish Islamic scholar Fethullah Gülen. She added that she was glad to have attended the contest and that she now has friends from various countries from around the world, thanks to the International Language and Culture Festival.

Culture Ministry Undersecretary Oprean gave a speech during the ceremony, emphasizing the significance of the message that the festival sends to the world. Recalling that the Eurovision Song Contest was also held on Sunday night, Oprean said Romania had focused on brotherhood and peace in its Eurovision song, adding: “The message of peace and brotherhood will transcend the borders of Europe and will reach the whole world. I wholeheartedly congratulate the children [who attended the festival] and those who organized it.”

Olgaç also spoke about the event in an interview with the Cihan news agency, saying the children attending the festival are spreading peace, love and friendship around the world via the language of music. He added that he was honored to attend the event and thanked all those who had contributed to it.

A Black Sea folk dance performed by students from Tanzania and Kyrgyzstan also exhilarated the spectators. In addition to the Black Sea dance, the same group of students also performed a folk dance from the Aegean region of Turkey, which received warm applause from spectators.

At the end of the night, all the students went on to the stage and sang a song called “Yeni Bir Dünya” (A New World).

The event is organized by the International Turkish Association (TÜRKÇEDER). The first 11 editions of the event were hosted in Turkey but due to government hostility and the ongoing persecution of the Gülen movement, or Hizmet movement — which is involved in organizing the culture festival — the organizers have held the event in various countries since 2014 to avoid potential problems.

President Recep Tayyip Erdoğan has accused the Hizmet movement of attempting to overthrow his Justice and Development Party (AK Party) government, but has failed to present evidence to support this allegation.

Despite the accusations he has leveled at the Gülen movement and the olympiads, Erdoğan himself attended the events many times in previous years. For instance, Erdoğan attended a ceremony held in İstanbul’s Atatürk Olympic Stadium on June 16, 2013, as part of the 11th International Turkish Olympiad. In the speech he gave at the ceremony, then-Prime Minister Erdoğan praised the Turkish Olympiads for their message of peace and friendship. Erdoğan also thanked the participating students, whom he called lovers of the Turkish language, and hailed the Hizmet movement for its contribution to world peace. The Hizmet movement, inspired by Fethullah Gülen, is a civil society movement dedicated to education and intercultural and interfaith dialogue.