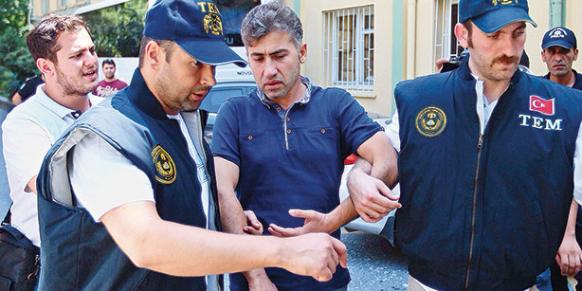 The government’s reworking of the justice system is primarily aimed at punishing the Hizmet movement, which government officials accuse of orchestrating the major corruption operation of Dec. 17, 2013. The movement denies the accusation.

On July 22, dozens of high-ranking members of the police force were detained in a large-scale operation. The suspects are accused of fraud in official documents, abuse of authority, illegal wiretapping, illegally obtaining documents related to state security and violation of privacy of communication. They have pled not guilty.

The government accuses the suspects of being members of the “parallel state,” a reference it uses for the Hizmet movement, and working to overthrow the government.

The operation was staged just after midnight at a time when the suspects were reportedly preparing to eat their pre-dawn meals before fasting during the day.

The Turkish Penal Code (TCK) and the Code on Criminal Procedure (CMK) proscribe the police from conducting raids on venues before dawn.

“Penal courts of peace have been established to punish patriotic police officers. Judges and prosecutors who worked to save the thieves [suspects in the major corruption operation of Dec. 17] from jail have been appointed to serve at these newly established courts,” he stated.

The order for the operation against the police officers was given by the İstanbul 2nd Penal Court of Peace, which only became operational in mid-July. The head of the court, Hulusi Pur, came to prominence in February when he decided to release six leading suspects in the corruption operation.

Judges serving at penal courts of peace are referred to as “super judges” as they have been granted a broad array of powers through a recently approved omnibus law introduced by the AK Party. These judges are criticized for being endowed with broad powers over investigations and other courts’ rulings.

The Hizmet movement promotes interfaith dialogue and the resolution of problems through peaceful means throughout the world. However, Prime Minister Erdoğan’s AK Party has recently been engaged in a bitter fight with the movement. This conflict intensified after Dec. 17, 2013, when the major government graft operation became public. The prime minister claims the operation was orchestrated by the Hizmet movement, which intended to overthrow his government. However, he has not provided any evidence to prove his claim. The movement denies the accusation.

On July 22, the prime minister admitted that the operation against the police officers had been carried out upon his instructions. Speaking on a TV program, he said the government is determined to continue its fight against Hizmet. “Everybody is well aware of our fight against [Hizmet]. We made the necessary appointments. We appointed new [super] judges and they will get to work soon. They will be part of our fight against the parallel state.”

According to retired Supreme Court of Appeals Public Prosecutor Ahmet Gündel, detaining police officers for contributing to the graft operation of Dec. 17 is wrong.

“Members of the police force do not carry out operations on their own. They are assigned by prosecutors,” he noted, adding that if police officers had not staged the corruption operation, then they would have been accused of defying prosecutors’ orders.

Gündel thinks the government is seeking to punish police officers due to the corruption operation because it believes it cannot punish prosecutors. “The police are considered a power the government can easily slap. This is not the case for prosecutors or judges,” he noted.

Ekrem Demiröz, head of the Bursa Bar Association, described the detentions of police officers as extraordinary. He said the government is hoping to intimidate its critics with the operation against the police force.

“The operation does not solely target the police force. It also targets all critics of the government. The government does not want anyone to criticize it. This is why the penal court of peace has been established,” he stated.

A single penal judge of peace will be authorized in all matters related to issues such as issuing search warrants, detentions and appeals to judges’ decisions concerning these issues.

Previously, appeals to the decision of a judge on such issues were brought before a team of judges, and a majority vote was needed for a court to rule. But in the current system a decision given by a single judge will be sufficient.

The first chamber of the Supreme Board of Judges and Prosecutors (HSYK), the composition of which was redesigned by the government following the Dec. 17 corruption investigation, has already appointed over 110 penal judges of peace across Turkey, six of whom will serve in İstanbul.

Topçu was on duty when prosecutors ordered the second wave of the corruption operation against nearly 50 suspects, including Bilal Erdoğan, the son of Prime Minister Erdoğan, on Dec. 25. Topçu was taken from his house in Halkalı.

Among the other detainees were Yurt Atayün, former head of the İstanbul Police Department Counterterrorism Unit, as well as former Deputy Police Chiefs Kazım Aksoy, Ramazan Candan and Gafur Ataç.

Most of the detainees were handcuffed as they were leaving the hospitals to which they were taken for a health screening. Handcuffing is an unusual practice for suspects under detention.

“Unfortunately, we are witnessing unlawful developments in our country. Police officers, who have been fulfilling their duties, are being targeted in an unlawful operation. Laws were changed, new courts were established and evidence was fabricated before the operation. The police officers were detained at midnight as if they were terrorists,” he complained.

Halaçoğlu also called on the AK Party government to publicly explain the legal grounds for the controversial operation.

Nevzat Korkmaz, an MHP deputy, said the operation was carried out in violation of human rights. He said the detained police officers did not do anything to deserve to be handcuffed — such as attempting to flee or defy the orders of the police. “The purpose behind the handcuffing was to discredit them in the eyes of the people,” he noted.

Korkmaz also said Prime Minister Erdoğan has two plans in the operation against the police officers. The first is to distract attention from his inaction against Israeli violence in Gaza and the second is to prevent people from discussing claims of corruption and bribery against government officials ahead of the presidential election in August.

Erdoğan is the AK Party candidate for president.