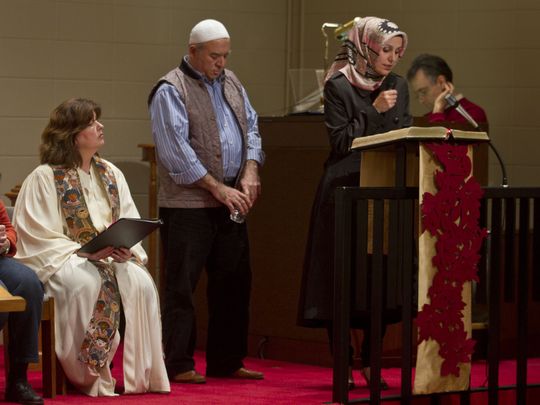 Fatma Kiline of Peace Islands Institute speaks to those gathered at the church. The Lincroft Presbyterian Church hosts the Bayshore Ministerium Interfaith Thanksgiving Service with the idea that bringing people of different faiths together will make the world a better place. Lincroft, NJ Tuesday, November 24, 2015 @dhoodhood (Photo: Doug Hood/Staff Photographer)

It was a powerful message, delivered to a church packed with Christians, Jews and Muslims who want to make this world a better place.

“Listen not with our ears, but with our hearts,” Fatma Kiline said at the start of an interfaith Thanksgiving service Tuesday night.

Kiline came to the gathering at Lincroft Presbyterian Church at a crucial time for interfaith relations, with the world roiling in the aftermath of Islamic terrorist attacks in Paris and elsewhere. She is a Muslim who works for Peace Islands Institute, a dialogue-promoting outreach organization with branches in five states.

“Seeing that the name of my religion is being hijacked every day is making me very sad,” she said in an interview before the service. “That is why I am standing here strongly against all those activities. I am here for peace and love, and I am here to share that love and peace that I believe in my heart.”

This interfaith Thanksgiving service has been held at rotating sites along Monmouth County’s Bayshore for many years, but its timing was particularly poignant Tuesday. And not just because of events abroad. Here at home, much of the presidential campaign rhetoric about American Muslims and the nation’s response to the Syrian refugee crisis has been heated.

This interfaith service focused on positives, such as songs and prayers of Thanksgiving from each religion. In interviews beforehand, the principals expressed concern about the direction of public discourse.

“As a leader in the community, the rhetoric of painting one segment of the population in derogatory terms is very reminiscent historically of what happened to the Jewish people in the 1930s and ’40s as they tried to get out of Nazi Germany,” said Rabbi Laurence Malinger of Temple Shalom in Aberdeen. “It disturbs me, it hurts me, it pains me, and I am working with others to make sure that we cannot make the same mistakes again.”

No names were mentioned, but the political arguments against the acceptance of refugees from Syria’s humanitarian crisis were on people’s minds.

Malinger said he is exploring ways to help Syrian families relocate to the area within the accepted legal framework.

“I would love as a community to help bring a family or two over, just like we did in the 1980s with Soviet Jews,” the rabbi said. “Their grandchildren are now living very productive American lives. It made a difference.”

The attendees Tuesday sought to do just that.

It was. You could hear a pin drop as leaders of each faith prayed for harmony. Three candles, united on one stand, glowed under a banner that read “We gather together.”

Symbols matter. Words matter. Actions, too. They all were present Tuesday, a microcosm of what the nation needs this Thanksgiving.

“There is so much disrespect and hate out there. This is the thing that counteracts that,” said the Rev. Virginia Jarocha-Ernst of Unitarian Universalist Congregation of Monmouth County. “Getting together in a positive way, because we have so much more in common than we don’t — that’s the way we’re going to create peace.”