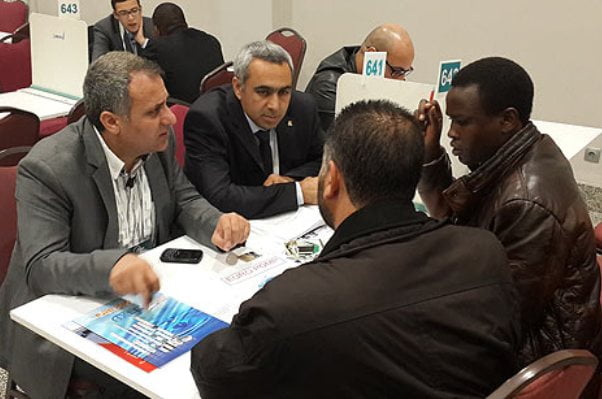 TUSKON said in a statement on Saturday that there are seven federations, 212 associations, 54,000 businessmen and more than 140,000 companies that are represented under its umbrella and that its founding goal is to help Turkish businessmen expand their trade to foreign markets.

TUSKON recalled that it estimates that more than $30 billion worth of trade deal was signed in the past eight years with the organization’s activities and that 70,000 businessmen, including 30,000 foreigners, participated in 19 “Turkey-World Trade Bridge” business forums since 2006. It added that it is a known fact that President Abdullah Gül as well as other state dignitories urged not only TUSKON members but also all other Turkish entreprenuers to invest in Africa.

It added that it is “absolutely normal” to meet with leading business circles and advise them about business opportunities in different parts of the world.

“We leave it to the conscience of the public to decide if these works should be criticized and turned into a defamation campaign or they deserve an applause,” TUSKON said in the statement.

The statement came a days after a voice recording surfaced on the social media, in which Turkish Islamic scholar Fethullah Gülen and TUSKON Secretary General Mustafa Günay discuss business opportunities in Uganda. Günay also mentioned about gifts sent from Uganda, which include pineapples. For days, government officials, including Prime Minister Recep Tayyip Erdoğan, publicly made fun of pineapples. Erdoğan once said “we will not allow a pineapple republic in Turkey,” in reference to the phone conversation between Günay and Gülen, which was illegally wiretapped.

TUSKON said in the statement that it is the job requirement of Günay to help Turkish businessmen, no matter if they are member of the business organization or not, build commercial relations with Uganda.

During the phone conversation, Günay tells Gülen about a tender to manage an oil refinery in Uganda and Gülen advises him to inform Turkish companies about the opportunity.

The statement said it is saddening to see the efforts of Günay to make Turkish companies win the oil refinery tender has become subject of unrelated debates instead of appreciation.

The statement said the issue about pineapples is part of Turkish culture of giving out gifts, adding that the organization rejects making fun of the issue.

TUSKON condemned in the statement the illegal wiretapping of phone conversation between Günay and Gülen as well as defamation and smear campaign based on these recordings.

It added that the TUSKON has already launched legal complaints against this smear campaign.

A 28-year-old man of Turkish origin has been handed down a prison sentence of eight months and a fine of 23,000 euros by a French court after he attacked several institutions affiliated with the faith-based Gülen movement in the country. M.Y. admitted to have taken part in six other attacks against Gülen-affiliated education and culture centers in France.