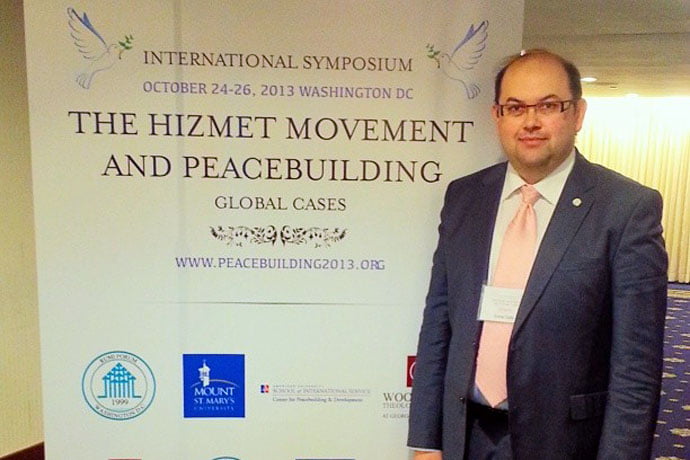 When was the last time you heard that?

I’ve heard it a few times — here’s the story.

I am now in my fifth year in Washington, D.C., having immigrated from Australia. Here I have had the pleasure and responsibility of presiding over the Rumi Forum, an organization dedicated to interfaith and intercultural understanding. As part of my position I have the good fortune to travel and talk about issues relating to pluralism, social cohesion, and peaceful coexistence.

On one occasion returning from a speaking engagement in Jacksonville, Florida, I stopped over at the Philadelphia airport for a short commute to a similar engagement at Georgetown, Delaware. I was seated amongst numerous dignitaries including State Legislators and various community leaders. After initial pleasantries we started speaking about the role of the Rumi Forum, and in particular the inspiration that Fethullah Gulen plays (Gulen is our Honorary President), and the motivation behind a global movement, Hizmet). This person had been on one of our study trips to Turkey as part of our intercultural mission to better educate leaders about this important Muslim majority country and strategic U.S. (and Western) ally. He knew quite well the important role Hizmet had played through numerous NGOs both globally and in the U.S. in regards to the values of civilizational dialogue, democracy, human rights, and respect for the ‘other’.

Yet at the end of the conversation he leant over to me and said, “I like what the forum and the wider movement does, but it’s too good to be true.”

Three days later, I was in Norfolk, Virginia, to speak at our local chapter’s awards night. I sat next to one of the recipients. An important civil servant, he had worked hard and passionately on various initiatives. He hadn’t known much about our forum but had inclined to accept the award after some personal research. After we had developed a rapport, he turned to me and said, “Emre, I respect all that you do and am honored to be receiving this award but it’s too good to be true.”

In my five years in this position, I had only heard those words twice, and they were three days apart. I wasn’t at all surprised. People for various reasons can have doubt or be skeptical about individuals or groups. But at the same time, I was somewhat saddened that after close to 15 years of service to the wider American community, particularly in the wider D.C. metropolitan area, the forum had people that had known us and our mission well or had come into contact with us through various programs still fostered doubt.

I wasn’t sure if it was our Muslimness, or Turkishness or the fact that the forum is part of a global movement (only becoming recently known to the wider American population through various articles) that somehow led to such skepticism. Is it purely a post 9/11 syndrome by a small minority or simply an attitude toward all forms of ‘other’ — and we happen to be the new or current ‘other’?

Does such skepticism further ostracize the ‘other’ or does it give rise to greater motivation and encouragement for such communities, groups and organizations to be more proactive? I believe it is the former. Our passion for community service can (and never should) be dampened by a handful. We need to ask ourselves, “What can we do further to bridge the gap between communities and eradicate doubt, prejudice and misunderstanding — personally, socially and intellectually?”

We should all be proactive in dialogue, and this is not too good to be true!

Emre Celik is an Australian based in Washington, D.C.’s Rumi Forum