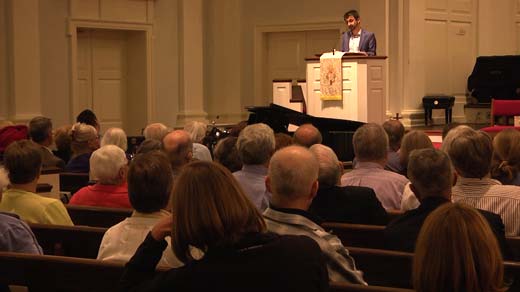 As President Barack Obama pledges to step up the fight against the Islamic State group, people in Charlottesville hope to help however they can.

On Thursday the Rumi Forum gathered to take a look at what leads to religious extremism.

The Rumi Forum and First Presbyterian Church in Charlottesville hosted a debate about the root causes of religious extremism.

Speakers say there’s no easy way to pinpoint the root cause, but a lot of it has to do with instability and perceived threats.

One of the speakers says insecurity plays a big role in pathways to radicalizing young Muslims. When people feel there’s a threat to their identity, they’re more likely to latch onto an authoritarian regime.

Gurbuz says Indonesia is the largest Muslim country in the world, but that’s not where we’re seeing this extremism.

He says that’s because there’s much more economic and theological insecurity in the Middle East.

While there’s no easy solution to this issue, the Rumi Forum says the debate is a start. Speakers said bringing together people from different fields is also helpful.