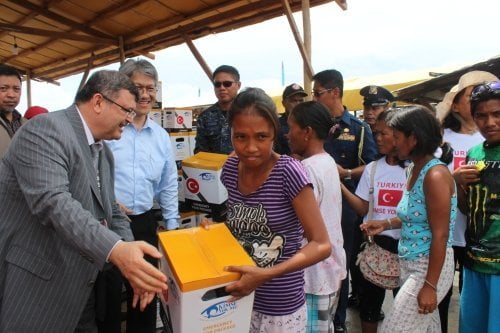 Kimse Yok Mu Foundation has launched a health center, women’s shelter and an orphanage it renovated after the devastating Haiyan typhoon of the last November in Tacloban, the Philippines. Additionally, it handed over a total of 50 computers and an ambulance vehicle to the Filipino officials.

The event series kicked off with distribution of 1,100 aid packages to the needy followed by the grand opening of the renovated health care center. The Filipino officials toured the center and commented that it was practically a hospital. They additionally thanked KYM’s volunteer doctors for their service.
Next were the openings of the women’s shelter and the orphanage. The children of the orphanage greeted their guests in joy with flowers in their hands.

Metin Cetiner spoke to Cihan News Agency: “We are one of the aid and relief institutions to have arrived here in the aftermath of the Haiyan typhoon. Today, we are here to hand over our completed permanent aid initiatives. We gave away aid packages to 1,100 families and launched the health center consisting of multiple departments in the morning. We still have our volunteer doctors doing screenings and distributing medication free of charge. As KYM, we would like to thank our people for their donations and assure them that their donations have found their addresses.”

Lastly, the foundation officials handed over the computers and ambulance vehicle donated by Time to Help, the KYM affiliate in Germany, with a ceremony at the Tacloban’s office of governor.

Admiral Garcia in his statements said, “I see what KYM have done in Tacloban as a help to entire humanity. Their assistance to those in need is worth seeing. The Turkish and Filipino people are now closer thank to these initiatives.”

Likewise, Tacloban’s deputy-governor Lila Czarina A. Aquitania said, “As you can see, everyone, especially the children, is thrilled to receive KYM’s donations. These computers mean a lot to them as the typhoon took away the old ones. The shelter, orphanage, ambulance and health center as well are great help for us. “

The Haiyan typhoon hit the cities Tacloban, Leyte and Samar on Nov. 8, 2013, leaving 7 thousand dead and causing 1.5 billion dollar damage in the region.