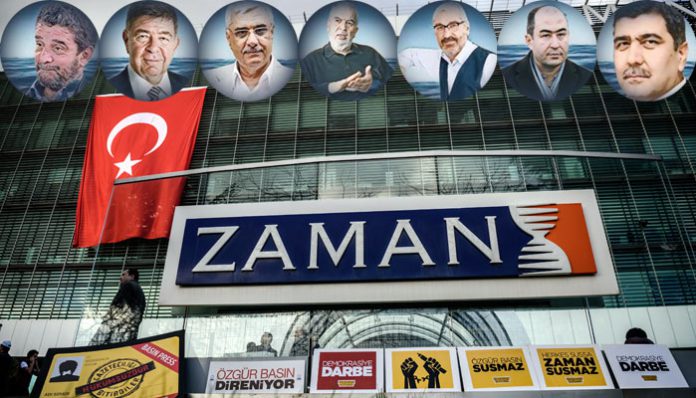 Speaking during the hearing at the İstanbul 13th High Criminal Court in the Silivri Prison compound on Monday, Ünal underlined that he was a journalist who was trying to survive by expressing his views in Zaman before it was shut down by the government. He also said he knows many members of the ruling Justice and Development Party (AKP) personally.

“I want to ask them [AKP members]: Are we terrorists?”

Underlining that he is standing trial for writing against the government, Ünal said he has never been afraid of being tried for the things he has written. “However, the indictment will go down in the history of the judiciary and the media for not having even the suspicion of a crime having been committed, let alone evidence of one,” he added.

Also testifying during the hearing on Monday, former Zaman night editor İbrahim Karayeğen said his name is among the suspects in the case; however, he doesn’t even know what charges he is facing despite having been held in pretrial detention for 414 days.

Underlining that he wants all putshchists who attempted a coup on July 15 of last year to be punished with the most severe of penalties, Karayeğen said he had been working at Zaman for 12 years and continued to work as a night shift editor with the new administration after the daily was seized in March 2016.

“Someone may ask why I continued to work at Zaman and why I didn’t leave it [after the government started to target it]. That is a cruel question. How could I find a place to work as a journalist when thousands of other colleagues were unemployed,” he said.

Denying that he used the infamous ByLock smart phone application, Karayeğen said he has never downloaded the app, believed by Turkish authorities to have been used as a communication tool among followers of the Gülen movement, which accused by the government of being behind the failed coup.

He also said he was detained after the abortive coup as he was trying to travel abroad, which is his legal right.

Karayeğen’s daughter Zeliha Esra Karayeğen was also arrested by a court on Aug. 10 for having an account in the government-shuttered Bank Asya and for downloading the ByLock application.

Along with Ünal and Karayeğen, a total of 30 former Zaman journalists, 21 of whom are in jail, are facing “terrorism” and “coup-plotting” charges due to having worked and written for the Zaman daily, which was linked to the Gülen movement.

Ahmet İrem, Ali Hüseyinçelebi, Süleyman Sargın, Osman Nuri Arslan, Osman Nuri Öztürk, Lalezer Sarıibrahimoğlu, Nuriye Ural and Orhan Kemal Cengiz are also named as suspects in the indictment, but they are being tried without detention. Professor İhsan Duran Dağı, who used to work as a columnist for Zaman, is cited as a fugitive in the indictment.