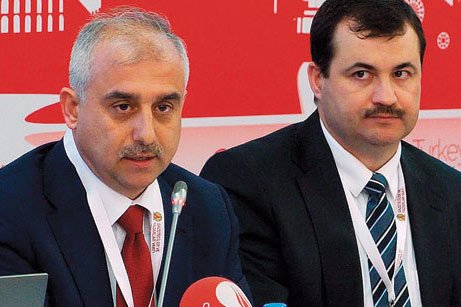 Journalists and Writers Foundation President Mustafa Yeşil (L), speaks in the opening session of the Abant meetings in western province of Bolu on Friday. (Photo: Cihan)

The Abant Platform started its 28th meeting on Friday at Lake Abant with the participation of over a hundred intellectuals, academics, journalists and pundits from different ideological backgrounds to discuss the current issues in Turkey.

The first theme of the meeting was on Turkey’s issues of identity. Participants agreed that the misinterpretation of secularism and the nationalist ideology of the state pose a problem, and urged the state not to impose any form of identity but to establish an equal citizenship for all regardless of religious or ethnic background.

Journalists and Writers Foundation (GYV) President Mustafa Yeşil said in his opening speech that the most important feature of the Abant Platform since the day it was founded was its ability to bring differences together in Turkey. Defining the platform as a table of thought that could generate a “common view,” Yeşil added that the platform could constitute an example of the fact that diversity is richness as well. He also said that the days when they would have debates in the international arena are not far away.

In the first session, titled “Identities, Demands and New Citizenship,” participants evaluated the repressive interpretation of secularism in Turkey. Writer Mustafa Akyol said: “In Turkey secularism has been officially interpreted to rescue the society from dogmatic religious beliefs. The Constitutional Court in 1989 said that it is also the state’s duty to save people from dogmatic beliefs.” According to him, as a reaction, religious believers developed two approaches. One is the complete rejection of secularism while the other is a different interpretation of secularism, which has gradually become the mainstream political view in Turkey. He reminded all that Prime Minister Recep Tayyıp Erdoğan himself also advocated secularism in Egypt in the wake of the Arab Spring.

Markus Dressler from Fatih University said that there seems to be a strong continuation of secularism since “the idea that the state should control religion has not changed.” Larry White from TOBB University in Ankara pointed out that despite the broader interpretation of secularism in the US, this country is also not free of similar debates and that the status of atheism is being discussed there.

“We don’t have the capacity to persuade people of the virtues of secularism,” said Gökhan Bacık from Zirve University as he added that, from a Muslim perspective, when you say you are Muslim, it goes beyond nationality. He advocated the tolerance of ideas and the practice of different beliefs.

In response to the question “Who is Turkish?” Reiner Brömer from Fatih University said that it is not a religious question because “the reason 30,000 people died [in the fight against the Kurdistan Workers’ Party (PKK)] was not relevant to religion.” He asked whether there is room in Turkey for different identities, religions or even family structures as he underlined that the problem is about citizenship rights.

Emphasizing the importance of creating a “participatory citizenship” in Turkey, Uğur Kömeçoğlu from Süleyman Şah University said that in the Turkish context, due to the authoritarian nature of the state, secularism always takes precedence over democracy. He argued that being a citizen was equal to being secular in Turkey. Repressive secularism only evolved into a more passive position in the 2000s, according to Kömeçoğlu, who urged the state to include the Kurdish, Alevi and Aramean identities in its idea of citizenship.

Nicole Pope, a columnist for Today’s Zaman, criticized the official ideology and said that “the citizen is mostly understood as the Sunni citizen in Turkey,” arguing that the religious aspect is also a part of the identity of who a Turk is.

Advising not overlooking the fact that Turkey has yet to become a complete democracy, Cemal Uşşak from the Abant Platform said: “We emphasize identities when they are oppressed. In Turkey, due to many years of emphasis on Turkishness, those who are not Turkish underlined their different identities.” Like other participants, he asked the state to protect all identities.

Drawing parallels between Turkey and Australia in terms of the multicultural nature of both societies, Broughton Robertson from the Australian Embassy defined a multicultural society as beneficial.

Criticizing the practice of secularism in Turkey and the existence of the Religious Affairs Directorate, Cafer Solgun from Yüzleşme Derneği said that a state that assumes all of its citizens are Sunni cannot be considered a democracy. Referring to the Dersim massacre of Alevis in 1938, he further criticized the “systematic assimilations” while adding that the rejection of requests put forth by Alevis is one of the areas where the official ideology has collapsed.

Participants agreed on the negative impact of nationalistic education policies, not only in Turkey but also in all nation-states, including Germany and France.

In the second session participants discussed Turkey’s foreign policy and regional role. While Turkey’s efforts to support the rightful demands of the Arab people in the region were appreciated, concern over deteriorating relations with the neighboring countries was raised.

Participants voiced their doubts about Turkey’s capabilities in terms of becoming a regional leader due to its limited material power. In this context, the importance of Turkey’s soft power was reiterated. Trade and investment were also cited as one of the main motivations for Turkey’s diversified foreign policy.

Turkey’s Kurdish issue was among the hot topics in the second session as participants argued that Turkey is not likely to become a regional power before it solves its Kurdish problem.