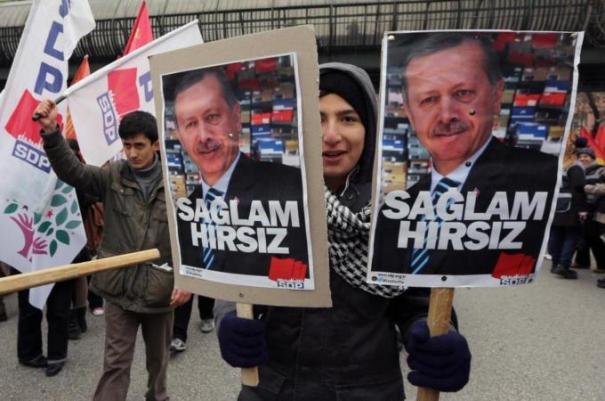 Recep Erdogan's government has been mired in a corruption scandal

As a prominent preacher, Fethullah Gulen has to express his opinion on politics, argues the author.

Trying to understand what has been going on in Turkey over the last couple of months is impossible without taking into account the corruption scandal that broke out on December 17, 2013. Yet an article which appeared on Al Jazeera succeeded in doing just that. It made no reference to the biggest graft probe that the country has ever seen.

On the contrary, as if to distract attention from the corruption probe, this op-ed placed the blame squarely on Islamic scholar Fethullah Gulen, claiming that he aims to control the state through his followers within the bureaucracy.

The Hizmet (Service) movement is a religious and social community inspired by the peaceful and progressive teachings of Gulen and encompasses a wide network of people not only in Turkey but also in 160 countries around the world.

It is true that Gulen is no simple preacher. Indeed, he encourages pious Turks to receive the best education possible, to go beyond the limits that the bureaucratic-authoritarian state has set for them and claim positions that were traditionally reserved for the elite. For this, he became the target of the Kemalist military, which views Gulen’s movement a threat to the oppressive Turkish secular state.

When the military launched a psychological warfare campaign to topple the Islamist government in Turkey on February 28, 1997, Gulen naturally faced the wrath of the soldiers and became a target. Some media outlets, which had been used as a “convenient tool” by the military, at the time, broadcast doctored tapes of Gulen to create the impression that his followers had “infiltrated” the state. Indeed, this was an argument that the aggressively oppressive secular state employed against religious citizens at large.

It is therefore an ironic twist of fate that pious Muslims would resort to the same tools previously employed by the repressive military regime to undermine Gulen and his movement.

The recent op-ed referred to the same videotapes that were used by the military during the February 28 coup era.

Although Gulen was charged with an attempt to change the nature of the regime during the height of military pressure in 1999, he was acquitted of all charges in a trial that lasted eight years.

It is no secret that Gulen encourages the sympathisers of the Hizmet movement to not shy away from holding positions within the state. Every Turkish citizen, at least on paper, is equally eligible for government jobs as long as they possess the necessary qualifications.

But who can accuse a Turkish citizen of “infiltrating” his or her own state? Does the state belong only to a certain group or interest? Arguing that the Hizmet movement has infiltrated the state is the same as admitting that it was under the control of someone else.

There are people from all walks of life, from all segments of society, and from all age groups who support Gulen. Unsurprisingly, there may also be police officers and judges and prosecutors who approve of Gulen’s interpretation of Islam.

However, in order to claim that their aim is to seize the state, one needs to bring forth concrete evidence that these people are taking instructions from Gulen or the Hizmet movement instead of their superiors within the bureaucracy.

The PM has been claiming that a “parallel state” within the state aims to topple his government, in reference to the Hizmet movement. Despite the illegitimate reshuffling of thousands of police officers and hundreds of judges and prosecutors, Erdogan’s government has not been able to track down a single piece of evidence of a “parallel state”.

In light of all signs of corruption, it has become evident that the whole parallel state argument is an imagined enemy that Erdogan uses in his fight against the “windmills”.

Criticising Gulen for expressing opinions on issues other than religion is another Kemalist argument. The founders of the Republic of Turkey did not want religious people to be involved in politics or social issues. As the spiritual leader of a global movement that has activities in areas ranging mainly from education to the media, and from business to aid organisations, it is only normal for Gulen to express opinions on non-religious issues.

In advanced democracies, pressure groups are welcomed and civil society is encouraged to serve as a control mechanism within the system.

Anywhere in the world, spiritual leaders and their views are taken seriously due to their impact on the masses. In Gulen’s case, it has been proven many times that he uses his influence in a constructive and positive manner, always asking people to act peacefully and within the boundaries of the law.

As for the unfortunate Mavi Marmara incident, in which nine innocent Turkish people were murdered by Israeli soldiers in international waters, Gulen did not “blame” the activists, as Kaplan argued. He said that he would advise his followers to cooperate with the authorities, if the purpose was to bring aid to the Palestinians. Gulen also placed an advertisment, expressing his condolences and describing the victims as “martyrs”.

Women who suffer from discrimination for wearing the headscarf in Turkey know well how displaying religiosity is a reason for being purged from state positions. Not only are pious Muslims forced to concel their identity by the repressive regime, but so are the Kurds, Alevis, and non-Muslims.

Ironically, today, it is the Justice and Development Party (AK Party) government, which had been oppressed in the past, that oppresses the followers of the Hizmet movement and openly discriminates against them.

What changed is not the principles of the Hizmet movement, but the government’s position, which succeeded to fool many with its democratic disguise until recently.

Sevgi Akarcesme is a columnist for Zaman, the Turkish daily which has the highest circulation in the country and a correspondent and blogger for Today’s Zaman, an English daily in Turkey.