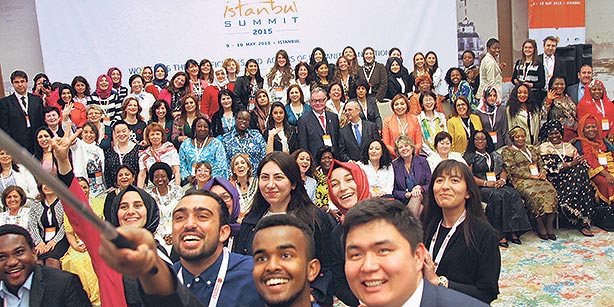 More than 300 women from 50 countries attend a summit organized by the GYV in İstanbul on May 9 and 10 to address problems faced by women around the world. (Photo: Today's Zaman)

As Turkey and many other countries marked another Mother’s Day on Sunday, more than 300 women from 50 countries came together in İstanbul on May 9 and 10 as part of an international summit to address the problems facing women around the world and identify possible solutions to these problems.

The international summit titled “İstanbul Summit 2015” was jointly organized by the Journalists and Writers Foundation (GYV) Women’s Platform and Turkish aid organization Kimse Yok Mu (Is Anyone There). The main topic of the summit was “Women as the Beneficiaries and Actors of Humanitarian Action.” Among the participants of the summit were representatives of 100 civil society organizations from around the world, 20 female lawmakers from various countries, female academics, human rights and women’s rights activists and female journalists. In addition, 34 local organizations from 25 different countries joined the summit. The summit supported the UN Women’s HeforShe campaign.

The participants of the summit emphasized that in order to be effective, humanitarian action needs to be inclusive and engage women as active participants, further stating that women are needed, both as actors and beneficiaries, at all levels of decision-making, including the design, planning, execution and monitoring of humanitarian action so as to ensure cost-effectiveness.

Underlying that humanitarian action, which embraces the principles of humanity, impartiality, independence and neutrality, should explicitly emphasize gender sensitivity, the final declaration of the summit also expressed that humanitarian action must be cognizant of the humanity and dignity of the recipients of humanitarian assistance and protection. “Accordingly, it should embrace the letter and the spirit of ‘do no harm,’” the summit participants stated in the declaration. “Do no harm” is a principle of international law requiring humanitarian organizations to strive to minimize the harm they may inadvertently be doing by being present and providing assistance.

Summit participants urged humanitarian donors to ensure that gender is a key criteria for making funding decisions, adding that “context-sensitive” humanitarian action should be prioritized, meaning that local, political and cultural realities and indigenous factors of a country should be taken into account when a humanitarian action is conducted.

Pointing out that sexual and gender-based violence increases in humanitarian crises, the summit participants emphasized that the national and local crisis-management systems must be gender-sensitive as a primary measure to prevent sexual and gender-based violence. The summit participants further emphasized that humanitarian intervention should be cognizant of the elevated risk to women’s reproductive health during humanitarian crises, leading to increased levels of maternal mortality and deteriorated mental wellness, and respond accordingly.

The summit participants also called on journalists to report in a gender-sensitive and gender-balanced manner and to capture the diversity of women’s perspectives and experiences, not only as victims but as survivors, defenders, witnesses and actors.

Furthermore, the summit also urged nation-states and non-state actors to recognize their responsibilities in the active prevention of refugee-like situations, including internal displacement, and to bear in mind that women and children make up the vast majority of the world’s refugee and internally displaced person (IDP) population. The participants also called upon the international community to recognize the key role of an empowered local civil society, including women’s organizations, in effectively addressing humanitarian crises.

UN ambassador: Demands of women should be listened to

Delivering the opening speech of the summit on Saturday, Ambassador to the United Nations Commission on the Status of Women Meryl Frank said she is very pleased to have attended the summit, saying that the demands of women should be taken into consideration when a policy that concerns women is adopted by legislators.

“When doing this [listening], both men and women should not be discriminated against. If you neglect to listen to women, who constitute half of society, you cannot improve public awareness in society,” Frank said.

Speaking also at the beginning of the summit, GYV Women’s Platform Secretary-General Müşerref Özer said, “We are discussing mainly the issues of migration and humanitarian aid in the context of women during this summit,” adding that the GYV is honored to host such a large-scale summit in İstanbul.