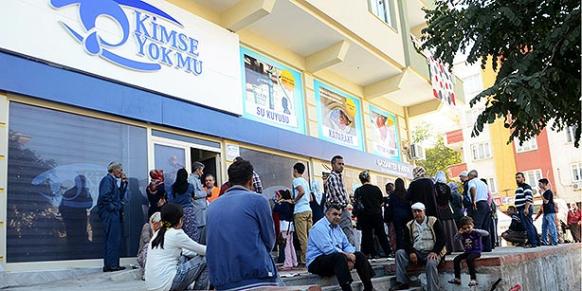 People gather in front of the Gaziantep branch of Kimse Yok Mu to get aid packages delivered by the charity organization on the first day of Eid al-Adha. (Photo: Cihan)

Kimse Yok Mu, which is affiliated with the faith-based Hizmet movement, became the target of the Justice and Development Party (AK Party) government in the wake of a corruption scandal that became public with a wave of detentions on Dec. 17. The government blamed the Hizmet movement for the corruption probe, which implicated many important figures of the AK Party government, accusing the movement of plotting with foreign collaborators to take it down.

Tanrıkulu also questioned whether prosecutors have been notified if the state inspections did in fact reveal irregularities.

He also asked Davutoğlu to respond to allegations that some ministers refused to sign the decision stripping Kimse Yok Mu of its right to collect donations and that inspectors assigned by the Interior Ministry have been offered job promotions if they prepare a report implicating Kimse Yok Mu. He also demanded the text of an inspection report that provided the ground for the government decision. He indicated that the inspection was completed in just one and a half days.