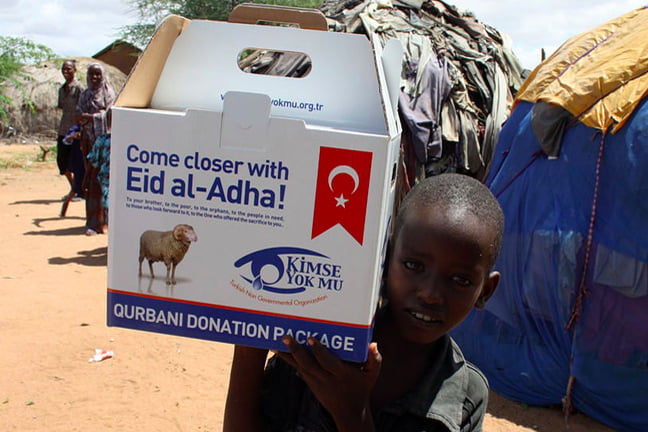 The volunteers included 180 philanthropists from several European countries –primarily Germany and Belgium- in addition to Turkey. The meat aid was distributed over four days to approximately 100 thousand families in six different cities across the country. Kimse Yok Mu, Mali’s Time to Help and several other foundations from Europe participated in the aid organization.

The Malian minister of Religious Affairs, Thierno Oumar Hasse Diallo, in his remarks, said: “That these people have come all the way from their countries in order to spend the eid with us can be explained solely by the inclusiveness of Islam. Islam lies at the root of this feeling of benevolence. Whoever holds belief and love for humanity can show this benevolence.”

Likewise, minister of Work and Social Welfare, Hamadoun Konate, said, “As a matter of fact, Malian people are familiar with the two aspects of Islam: Tolerance and inclusiveness. The cooperation in Mali, which is going through hard times, presents an example for us. It should be noted that Islam is all about love, which is indeed the love for humanity.”

Kimse Yok Mu Foundation gave away Eid al-Adha meat to the needy in Venezuela’s largest slum, Petare, in the capital Caracas. The foundation’s volunteers who reached out to over 3,500 families were well received by the inhabitants.

Those in need formed a long queue in the street to receive the aid by Kimse Yok Mu in cooperation with the local Puente Cooperation Foundation. In addition to Petare people, the foundation provided aid to those who previously suffered natural disasters as well.

Puente Foundation director, Mustafa Ozturk, sent his thanks to the donors in Turkey: “With their donations, the philanthropists in Turkey have brought joy to thousands of families. Even we, as mere agents for the aid, were moved to see their happiness.” Ozturk further recalled that they had provided aid to 1,500 families back in the month of Ramadan.

A female resident noted she’s happy to receive the aid and thanked Turkish people for that.

The underprivileged in Bangladesh, one of the most impoverished and populous countries in the world, cheered up with the Eid al-Adha aid from Turkey. Kimse Yok Mu Foundation which has been providing relief and aid to the country since 2008, on behalf of Turkish donors, again delivered eid donations to the capital Dacca. With a population of 163 million consisting of a Muslim majority by 90%, Bangladesh is at the same time home to Muslims having fled the Buddhist oppression in the neighboring country, Myanmar.

Having exchanged eid greetings with the locals, Kimse Yok Mu team went on to slaughter and distribute a total of one thousand cattle. Moved to see the misery and desolation of the Bengali people, the volunteers said they felt the hearts getting closer thanks to the eid.

Meat distribution took place in the capital city Jakarta, Ache, Bandung, Semarang, Banjarmasin, Depok, and Yogyakarta. In addition to the Turkish businessmen and teachers, Indonesian politicians and religious figures as well were involved in distributing the aid.

Din Syamsuddin, who is the leader of Indonesia’s second largest religious community, namely Muhammadiyah, also participated in PASIAD’s meat distribution. As an expression of his appreciation, “You’ve benefited our country by establishing great schools. You’ve achieved great success. And now you are here to distribute sacrifice meat aid. All these show that there are good Muslims in Turkey and we still have strong ties,” Syamsuddin said.

A prominent politician and former parliament speaker Hidayat Nur Wahid was again involved in slaughtering and distributing the sacrifice animals, like he did every year. Wahid expressed his gratitude to Kimse Yok Mu and Turkish donors for their contributions. ”Indonesia too is a Muslim country like Turkey. Yet, we unfortunately fail to cherish sacrificing animals as much as we should. Thanks to Kimse Yok Mu and PASIAD, now we better appreciate it. We too might provide eid aid to other countries in need in coming years. I pray that number of such organizations increases. I would like to thank those making these possible,” Wahid remarked.

Secretary-general of PASIAD Indonesia office, Huseyin Kan, noted they had been on duty by slaughtering and distributing meat since the eid’s first day. Noting that he’s been in Indonesia for long years, “Together with a large number of Turkish-Indonesian schools’ teachers and supporting volunteers, we’ve had a busy schedule during the aid. Thanks to our aid team, nearly 10 thousands of people are able to take meat back home. I sincerely believe that sweat of our brow will contribute to form even stronger ties and revive solidarity and cooperation spirit that the world is in need of,” Kan said.

The very first Eid al-Adha joy filled the Iqbal Town, the housing complex constructed by Kimse Yok Mu in the aftermath of the destructive flood in 2010, in Pakistan’s Punjab province. The volunteers from Turkey joined the locals’ eid prayer at the town’s mosque, which was attended by Muzaffargarh governor and police department chief as well.

Having exchanged eid greetings with Pakistani friends, KYM volunteers went on to slaughter and distribute the sacrifice meat by Turkish donors to the underprivileged. Afterwards, eid gifts were distributed to the town’s children in a tent set up in the heart of the town.